Chicago’s historic Studebaker Theater will become the home of live opera with a contemporary adaptation of Henry Purcell’s 1692 The Fairy Queen, a reimagining of Shakespeare’s A Midsummer Night’s Dream presented by Chicago Opera Theater (COT) beginning November 5. California-based performance troupe Culture Clash and COT’s Andreas Mitisek put a modernized spin on Purcell’s adaptation of Shakespeare’s classic with an edgy, yet satirical, look at the mortals beings make of relationships.

Like the story upon which it's based, The Fairy Queen is rich with whimsy and drama. Ron and Tanya, known to some as Oberon and Titania, are preparing to throw a party to celebrate Ron’s birthday at ‘Club Puck’ in sultry Las Vegas. The party planning comes to halt when Tanya discovers Ron flirting with one of the club’s dancers. In a haphazard attempt to fix the blunder, Puck (the fiendish club owner) offers Ron a mysterious juice from a cactus flower that should renew Titania's love. The concoction does as promised, but cupid’s arrow misses its mark a bit, and the magic potion finds its way into several unwitting hands causing lovers’ eyes to wander, lines of sexual orientation to blur and chaos to arise.

The libretto for The Fairy Queen, adapted from A Midsummer Night’s Dream, is performed in English. The work will be conducted by Jory Vinikour and directed and production designed by Chicago Opera Theater’s Stefan Edlis and Gael Neeson General Director Andreas Mitisek.

“Audiences familiar with Purcell’s classic adaptation will be surprised and enchanted with this contemporary re-telling from the minds of the iconic Culture Clash,” said Mitisek. “This opera brings together a talented cast and Haymarket Opera Orchestra’s period instrumentation inside the historically rich and newly renovated Studebaker Theater to bring to life the story of the Fairy Queen once again.”

Together with Mitisek, COT’s contemporary adaptation of The Fairy Queen is written by Culture Clash, a California-based performance troupe founded by Richard Montoya, Ric Salinas and Herbert Siguenza, who have been writing and performing together for over 30 years. The award-winning group’s work ranges from comedic sketches to screenplays and full-length plays around political and social satire.

The orchestra for the upcoming production is composed of the Haymarket Opera Orchestra (HOO). Since its debut performances of Handel's Aci, Galatea e Polifemo in 2011, period ensemble HOO has been consistently praised as a premier ensemble and opera company.

The cast includes Kim Jones in the role of Tanya/The Fairy Queen, Marc Molomot as club owner Puck, and Cedric Berry as Ron.

For more information or for tickets, visit chicagooperatheater.org or call 312.704.8414. 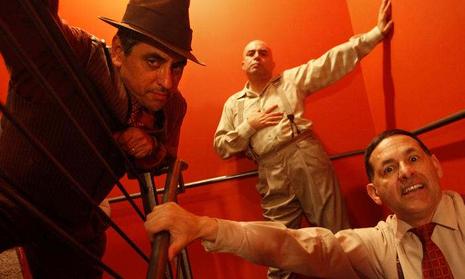