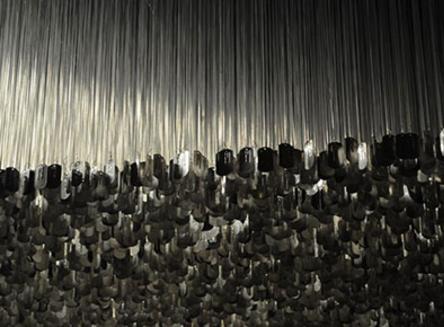 Above and Beyond, a 58,000 dog tag art installation created by Veteran Artists, will be on view next spring at the Harold Washington Library (photo courtesy of the City of Chicago).

Through an extraordinary effort to understand combat through the eyes of those who experienced it, the National Veterans Art Museum and the Chicago Public Library partner to present, Above and Beyond, the 58,000 dog tag art installation created by Veteran Artists, a very important art exhibition reflecting on the meaning and consequences of the Vietnam War. The exhibition features over 58,000 dog tags representing U.S. military personnel who lost their lives in the Vietnam War. Above and Beyond will be featured as an extended exhibition, opening on February 20, 2016 and continuing through April 15, 2020, at the Harold Washington Library Center, 400 S. State Street. The Above and Beyond exhibition is made possible through private and public grant donations to the National Veterans Art Museum, and administered through the Chicago Public Library Foundation.

Above and Beyond was commissioned by the National Veterans Art Museum and created by U.S. Military Veterans (and artists) Rick Steinbock, Ned Broderick, Joe Fornelli, and Mike Helbing. The exhibit is comprised of hand-stamped replicated dog tags of every U.S. soldier killed in service to their country in Vietnam. The dog tags are suspended from the ceiling of an open 13 x 34 foot installation, making the impact of combat visible to all.

“Chicago Public Library is extremely proud to feature the Above and Beyond exhibit at the Harold Washington Library Center,” noted Library Commissioner Brian Bannon. “It is so important that the people of Chicago see their Library as a place where ideas are brought to life and shared, whether it be through a book, picture, story or a highly impactful piece of art.”

“Above and Beyond is a powerful piece of art that makes a bold statement on the impact of combat to our society, and is all the more potent as it was created by veteran artists who served in Vietnam,” said Lionel Rabb, Chairman of the National Veterans Art Museum Board of Directors. “Above and Beyond exemplifies the quality and stature of veteran art, while showing its ability to expose people to the realities of war and combat.”

In October 1981, a group of Vietnam War veterans put together an exhibition of artwork based on their war experiences. The success of the show led to the establishment of the Vietnam Veterans Art Group. Fifteen years later, with a building donated, the National Vietnam Veterans Art Museum was launched. In 2003, the museum began accepting work by veterans of all conflicts and, in 2010, changes its name to the National Veterans Art Museum (NVAM). While the NVAM is one of the only museums in the world to collect and exhibit artwork exclusively created by veterans in a permanent exhibition, it also provides important programming for veterans, their families, and the community.