Chicago Sculpture International (CSI) will celebrate a decade of bringing sculpture to the community and a sense of community to Chicago’s sculptors at their 10th Anniversary Benefit Gala, Saturday, October 25, 2014. The gala will take place at Elks National Veterans Memorial (2750 N. Lakeview Ave.) Also the site of CSI’s 2014 Biennial exhibition Invoking the Absence, the domed, Beaux-Arts structure will be brought to life with cocktails, a variety of delicious hors d'œuvres, live music, performance art and the work of 22 CSI members.

In addition to the artwork on view inside of the historic war memorial, CSI’s 10th Anniversary Benefit Gala will feature door prizes that include a print by seminal glass artist Dale Chihuly, live music throughout the evening and live “sculptures.” The evening will also include passed appetizers from Duran European Sandwiches, Pan Hellenic Pastry Shop and Vanille Patisserie. Beverages will include craft beer from Bell's Brewery and Lagunitas Brewing Company and a specialty themed cocktail.

Invoking the Absence reflects on the positive and negative space created through the act of sculpting. The exhibition features works by 22 sculptors examining artistic notions of emptiness and the ever-present void in space and time, through formal order and creative conflict. Free and open to the public, the exhibition is on view until October 26 at Elks Memorial. CSI artists will be in conversation during a VIP-only portion of the evening from 6-7 p.m., discussing the themes and methods used in their work alongside their sculptures.

Recent milestone projects produced by CSI in 2014 include two collaborations with the Chicago Park District. Sculpture on the Boulevards lined boulevards and streets including Logan, Independence, California and Western with art by CSI sculptors and this summer’s Chicago Tree Project transformed sick and dying trees into vibrant pieces of public art in parks around the city.

For more information and tickets to the 10th anniversary benefit, visit chicagosculpture.org or email info@chicagosculptors.com. 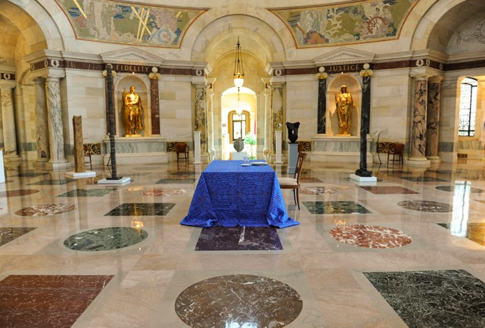