During the event, Chicago Shakespeare presented the annual Spirit of Shakespeare Awards, honoring those who embody Shakespeare’s spirit through community engagement and artistic leadership.

​This year’s Civic Honoree, BMO Harris Bank, has been an instrumental partner in making the arts accessible to every person in Chicago through their leadership support of the free Chicago Shakespeare in the Parks tour since its inception in 2012. For 200 years, BMO Harris has supported a mission to “make tomorrow better” through a Community Giving philosophy anchored in the tenets of collaboration, learning, and innovation. As civic leaders and philanthropists, they work with an impressive portfolio of community partners across Chicago and nationwide. David Casper, U.S. CEO, BMO Financial Group, accepted the honor on behalf of the institution.

​In honor of the citywide Year of Chicago Theatre initiative in 2019, the Spirit of Shakespeare Award Artistic Honoree collectively recognized “The Chicago Actor.” The award salutes thousands of local actors whose talent and passion have served as the heart of Chicago Shakespeare since the company’s founding. Actors Kevin Gudahl, Heidi Kettenring, Emma Ladji, Ross Lehman, and Mike Nussbaum shared their experiences with Chicago Shakespeare on behalf of the Chicago Acting Community.

Artistic Director and Founder Barbara Gaines shared the impact of the Chicago Actor stating, “What thousands of Chicago’s actors give and have given to audiences every night—on stages across the city—are their hearts, and souls, their invention…they shine lights in the world where there are none.”

Following a cocktail reception and seated dinner across the theater’s lobbies, 350 attendees from Chicago’s civic and cultural community enjoyed a one-night-only performance from the Chicago Shakespeare cast of the hit North American Premiere musical Six in The Yard at Chicago Shakespeare. Among the star-studded performances during the evening, audiences were treated to selections including “Life of the Party” performed by Samantha Pauly, “Best of My Love,” performed by Adrianna Hicks and “Rise Up,” performed by Anna Uzele. The Queens finished off their performance with the electrifying confetti-filled finale from Six, which was recently extended due to popular demand for five additional weeks, now through August 4.

Through the generosity of the Lead Consortium, the Host Committee, and the advocacy of Chicago Shakespeare’s Board of Directors, CST’s Gala 2019 supports the Theater’s Chicago Shakespeare in Classrooms and Communities initiatives that annually serve thousands of students, teachers, and family audiences.

​The festive Old Hollywood-themed atmosphere featured striking visuals from MDR Creative Inc. and lush floral arrangements from Pollen across the company’s multi-level campus on Navy Pier. In the lobby, artists in lavish costumes from past Chicago Shakespeare productions mingled and posed for photos with guests. To cap the night, guests pledged direct support to Chicago Shakespeare’s education and community initiatives during a paddle raise.

CST’s Gala 2019 was generously supported by the theater’s Lead Consortium, including: BMO Harris Bank; Exelon Corporation–Robin and Steve Solomon; Harve A. Ferrill; and Food for Thought; among other leading business and civic leaders. 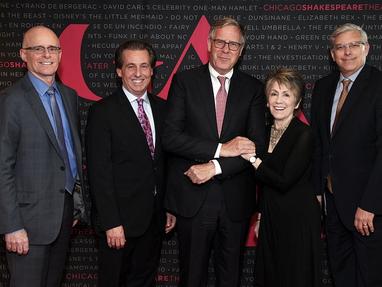