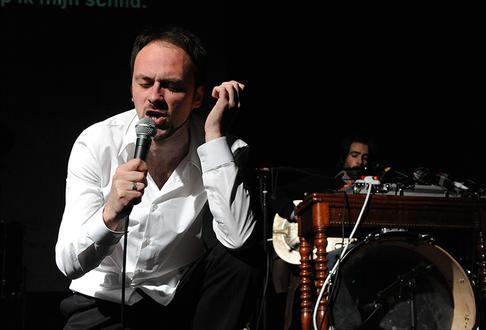 Chicago Shakespeare Theater (CST) and Thalia Hall will partner to present Theater Zuidpool’s Macbeth, a two-night-only concert event from Belgium as part of the Shakespeare 400 Chicago  celebration, a yearlong international arts festival spanning 2016 celebrating the vibrancy, relevance and reach of Shakespeare as the world commemorates the four hundred years since the playwright’s death in 1616. A dynamic and feverish production bordering between underground opera and rock concert, this Macbeth is a music theater deconstruction of one of Shakespeare’s most recognizable works with an original score in English by two of Belgium’s greatest alternative musicians, Mauro Pawlowski (of dEUS) and Tijs Delbeke (of Sir Yes Sir). In this live stage production, the musicians weave together various rock, folk, alternative and operatic musical styles to create a dialogue between Macbeth and his wife, telling the story of their bloody takeover of the Scottish throne. This wholly unique musical experience will be presented at Pilsen’s famed concert venue, Thalia Hall.

The visceral rendering of the Bard’s chilling tragedy has entranced music critics and Shakespeare lovers alike. Belgium’s DeMorgen raves “never seen anything like this before...Theater Zuidpool transforms Shakespeare’s Macbeth into an underground-like opera, provocative and modulating with an arsenal of musical genres, and poetry used as a weapon.” De Standaard calls it “a startling Zuidpool-creation... Not often is the dim discomfort of Macbeth so precisely touched upon.”

​For more information or for tickets visit www.chicagoshakes.com or call the Thalia Hall box office at 866.777.8932.

Theater Zuidpool will bring Shakespeare to Chicago in a way like never before in their provocative opera/rock concert mashup of Macbeth this summer (photo by Raymond Mallentjer).