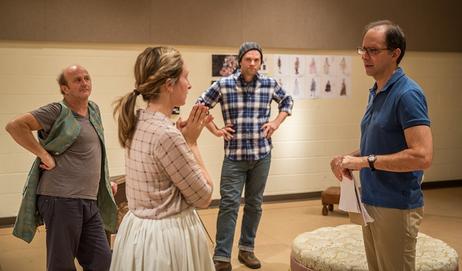 Under the heading of classic French comedy, the name Moliere carries the weight of greatest notoriety. It’s as if 17th century France relied entirely on a single individual for levity. Of course, many writers contributed to the 17th century French stage. Why the level of fame rises higher for one individual or another is open to conjecture but under the heading of great classic French comedy, a convincing case can be made for playwright, Jean-François Regnard.

That was the question playwright David Ives asked himself when approached by artistic director Michael Kahn to adapt Regnard’s most famous play, Le Légataire Universel, for Shakespeare Theatre Company in Washington DC. So, Kahn sent the script. In response, Ives’ delighted in Renard’s witty, point-devise play. After three months of study and three months of writing, he created the stage adaptation directed by Kahn at Shakespeare Theatre Company. This resulted in a 2014 off-Broadway production directed by Tony Award winner John Rando and now a new production at Chicago Shakespeare Theatre restaged by Rando.

Rando, whose many credits include such Broadway shows as On the Town (Tony nomination), The Wedding Singer, Neil Simon’s The Dinner Party and Urinetown (Tony Award), has developed a nice working relationship with Ives. It was while directing a revival of Ives’ collection of one-acts, All in the Timing, that the two met. “I met John twenty years ago when my agent suggested I go to Syracuse to see a production of All in the Timing that John was doing. He was young, he was smart and funny and the show was terrific. We quickly started working together—first, I think, on Mere Mortals, an evening of one-acts.”

Rando’s 2013 Off-Broadway revival of Ives’ insanely funny evening of one-acts, All in the Timing, garnered him an Obie Award. Anyone who’s seen or read an Ives’ one-act knows his mastery of the short form: the sharp, witty dialogue built around a single, clear situation—typically ironic—with a surprising, yet inevitable ending. Ives’ cuts away the fat and gets to the point, a point that induces contemplation, transcending the risk that simple premises might dissolve into sugary sit-com material or some forgettable sketch, which brings us back to The Heir Apparent. How can a 1708 French verse play written in rhyming couplets become a part of this playwright’s catalogue?

As it turns out, the master of the short form has a long history with translation/adaptations, or as Ives calls them, “translaptations.” He has also “translaptated” Corneille, Moliere and Alexis Piron. And even though Ives was unfamiliar with Regnard, he quickly saw the potential in Le Légataire Universel. “I needed only a single reading to know I had to take on the piece,” Ives notes in his introduction to the play.

In the tradition of classic, 17th century French comedy, there is bawdiness, deceit and greed presented in a cast of alternately clueless and devious characters. The hero of the play is Eraste: old enough to want inheritance of his supposedly dying Uncle Geronte’s fortune, young enough to want the security of some form of income—without being forced to work, that is. He hopes to marry his sweetheart, Isabelle. But Isabelle’s mother, Madame Argante, won’t allow the lovers to marry unless Geronte leaves his entire fortune to Eraste. The play opens on the day that Geronte plans to dictate his will to his lawyer. Eraste, and his two servants (themselves sweethearts who stand to benefit from Eraste’s fortune) plot their strategies with persistent obstacles to overcome. There’s plenty at stake and plenty to pursue as everyone waits for the lawyer to arrive before Geronte kicks the bucket. And, of course, who Geronte plans to leave his fortune to is the hot topic.

The most surprising thing about The Heir Apparent is how well Ives crafts what was originally French rhyming couplets into English rhyming couplets, all the while maintaining meaning, the verse rhythm and very natural sounding dialogue. Add to that the humor that infuses this work with an enormity of levity and you’ve got work of brilliance.

Until Pulitzer Prize winning poet Richard Wilbur began translating Moliere into English in the 1960s, the standard was compromise: abandon meter, abandon rhyme, abandon wit. But Ives’ achievement is all the more impressive because he makes no claim as a poet. “Oh, I’m sure I have some poetry in a drawer somewhere but this play is verse, not poetry. I would not insult the dignity of poetry by calling this poetry,” he told me.

Rando begs to differ: “David is a poet. He can read Homer in its original language and Dante in Italian. He also knows German,” It’s natural that Ives would understate the poetry of The Apparent Heir; after all, his craft is dialogue and assigning the title of poetry might misrepresent the writing as unapproachable. In Ives’ opinion, “plays should only be translated by playwrights,” or perhaps translaptated. Proving the point that translations should not make old plays into a museum pieces, Chicago Shakespeare audiences will quickly see the anachronisms Ives plants in the script. Among the decidedly non-1708 references are: Cadillac, soccer mom, Kool-Aid and Miss Piggy—just to name a few. Surprisingly, this tactic works. Ives likes to keep his translations contemporary and surprising.

When The Heir Apparent was slated for its New York production, Rando was the obvious choice to direct. Rando took to Ives’ translaptation as quickly as Ives took to Regnar’s original, especially what he describes as the play’s, “smart, biting, social satire.” The production opened in 2014 and won Joseph Calloway Awards for two of its actors: Suzanne Bertish as Madame Argante and Paxton Whitehead as Geronte.

With the exception of Whitehead, who will reprise his role for the Chicago Shakespeare production, Rando will be working with a brand new cast. And he’s looking forward to working in Chicago Shakespeare’s Courtyard Theatre. “I’m very excited to get inside this space. It’s a beautiful theater.” There will, of course, be the challenges of a new production in a different theater but Rando is excited at the prospect. “Barbara Gaines (artistic director of Chicago Shakespeare Theatre) saw Heir Apparent in New York and wanted me to stage it in Chicago. She’s a fan of mine and I’m a fan of hers and Chicago Shakespeare.”

Rando and Ives are at work on their next project together as well, a performance piece. Ives is also working on a musical with Stephen Sondheim and putting finishing touches on a screenplay. But despite his schedule, he will be in town for some rehearsals to, as he insists, “put his two francs in.”

Chicago audiences can look forward to a classic made new. Chicago Shakespeare Theatre argues for classics by finding the contemporary purpose inside. It’s a good fit. Ives and Rando have a way with taking the 17th century into the 21st.