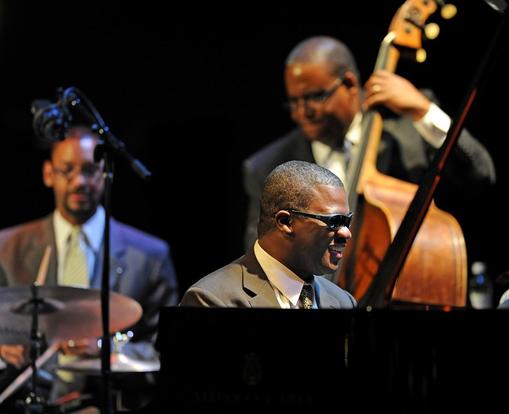 Chicago Sinfonietta, led by music director Mei-Ann Chen, will conclude its 2016-17 season by celebrating nearly a century exploring the connection between jazz and symphony from ragtime to Broadway and beyond, featuring the world-renowned Marcus Roberts Trio and a special guest appearance from Chicago Sinfonietta’s assistant conductor, Deanna Tham. The Sinfonietta will perform Rightness in the Rhythm twice: first, in the western suburbs at Wentz Concert Hall of North Central College, Naperville, Friday, May 12 at 8 p.m. and then again in its downtown Chicago home venue of Symphony Center, Monday, May 15 at 7:30 pm.

This upbeat performance will begin with ragtime pianist Scott Joplin’s Treemonisha led by Deanna Tham. Rightness in the Rhythm follows with two widely popular Broadway hits: George Gershwin’s An American in Paris concluding the concert’s first half followed by Leonard Bernstein’s On The Town: Three Dance Episodes, which showcases three movements from his hit Broadway musical opening the program’s second half.

The second half of the program brings a flurry of incandescent piano courtesy of the Marcus Roberts Trio lead by critically-acclaimed modern composer and jazz icon Marcus Roberts. The trio closes the program with their own spin on Gershwin’s Rhapsody in Blue, injected with musical improvisation, making it unique every time it’s performed. Marcus Roberts’ improvisational style, which began when he learned to play piano after losing his sight at the age of five, has led to ground-breaking contributions to jazz and the development of an entirely new approach to jazz trio performances.

Says Mei-Ann Chen of the concert, "We’re excited to close our 2016-17 season with a performance of upbeat, exciting jazz works joined by the phenomenal Marcus Roberts Trio, and our assistant conductor, Deanna Tham. We’ve been wanting to present a jazz-focused concert and I can assure our audiences that this unique program, in which all of us will witness live improvisation at each performance, will be one of the most memorable. Chicago Sinfonietta has helped many young conductors further their professional careers - Deanna Tham, another young star in the making, will also be making her Chicago debut in the Overture to Joplin's opera Treemonisha. Not only is this program a wonderful way to end a wonderful season, but the music is a great way to herald in our 30th Anniversary Season next year.”

​​Before the show and during intermission, audience members will have the opportunity to learn more about Chicago’s rich jazz history, make their own instrument and take their turn playing, improvising and scatting during a live jam session.

​For more details about the concert’s program or for tickets, visit cso.org.