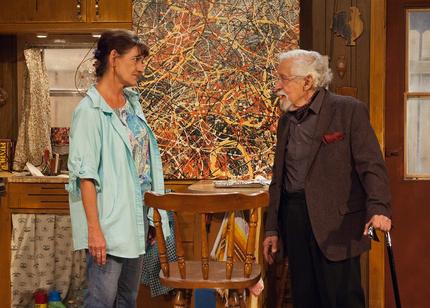 September 28, 2016 - For a tortured soul, Jackson Pollack didn’t have it all that bad. In the art world, the inventor of abstract expressionism was taken quite seriously in his own life—enough so that he made a living at his art…enough so that he was a sought after artist…so much so that he became a celebrity. He was tortured by his compulsion to paint in much the same way Van Gogh was, yet Van Gogh was not appreciated in his day—which doesn’t mean his controversial work doesn’t get questioned. The question is: what is art?

For Jackson Pollack, art was a canvass laid on the ground and assaulted with paint dribblings, splatterings, assaults of color and texture. He was known to paint with sticks and knives. To some his paintings look like nothing more than a lot of color thrown at a canvass without direction, form or content. The result seems to many a mess, naturally (or a natural mess)—because Pollack wanted his paintings to have texture, to stamp his fist of expression upon the canvass.

The debate over what is art is as old as a cave painting. Even in the theater. Red and Art are two plays of the past fifteen or so years that grapple with the question of what is and isn’t art. Now we can add Bakersfield Mist, written by Stephen Sachs and receiving its Chicago premiere this month at Timeline Theatre, to that repertoire.

Unemployed, trailer-trash Maude happens upon an ugly-as-sin painting at a thrift store. She buys it for five bucks and decides to give it to her neighbor on a lark. The neighbor hates it and, besides, the thing is too large. So, Maude hangs onto it until a local art teacher tells her that it just might be an authentic Jackson Pollack painting…and worth millions.

​Maude does her research and learns a lot more about Pollack and Abstract Expressionism, more than she probably ever cared to know. One thing she learns quickly is the need to get the thing appraised by an expert and have the authenticity that she’s already certain of confirmed.

Enter Lionel Percy, art expert extraordinaire, with a curriculum vitae bigger than Maude’s trailer. She’s not easily impressed by Lionel’s snobbishness and he’s not exactly charmed by Maude’s earthiness; it’s a nice set up for conflict, which we get.

Maude, played with perfect redneck charm by Janet Ulrich Brooks, has done her homework and is ready to take on Lionel who won’t budge on authenticity and what he believes to be true art. Mike Nussbaum, at 93, the oldest working actor in Actor’s Equity, brings astonishing energy and vigor to a character that might easily be played too close to the vest. Over the course of eighty-five minutes, the common interest that brings these polar opposites together opens a discussion that goes way beyond what is and isn’t art. For these two, this abstract piece work is only a brush stroke compared to the feelings of self-worth it symbolizes for both characters.

Maude, existing at the far end of middle-age, needs to have this work of art represent everything in her life that seems ugly at first glance but becomes priceless when someone who really knows takes a closer look. What’s at stake for her is significant. Likewise, Lionel’s expertise has fallen under question; a life’s reputation rests on the accuracy of every art appraisal. He’s had a few hiccups in his time and a final misstep could corrode his final legacy.

​It’s the fire in Brooks’ and Nussbaum’s performances that make the production most worth seeing. They make something of the script’s redundancies; in lesser hands this talky, though intriguing, piece of writing might lapse into tedium. Another huge winner is the set: designed by Jeffrey Kmiec, the details of Maude’s abode seem plucked straight from an actual trailer park. Complete with a live fish tank, working television, beer-bottle wind chimes just outside the door, and the orderly detritus of 36 years of bric-a-brac, we see a world that is both cozy and confined. Kmiec makes good lateral use of the stage; like Maude’s life, her trailer is long but not very deep. I don’t believe the actors have more than six feet to walk from upstage to downstage, and the claustrophobia works in a world where there’s no place to hide.

It helps that Bakersfield Mist is based on a true story. Without that knowledge, I don’t know if I would quite believe everything in it. For example, Maude turns down an anonymous offer of $2,000,000 for the painting. (The real-life Maude actually did turn down this offer, feeling that the painting had greater value.) Timeline’s production comes close to making us believe there might be a reason someone like Maude would pass on such an offer but the script doesn’t quite dig far enough into her character for us to do much more than trust the data we’re given. With flaws inherent in the script, Bakersfield Mist still makes for interesting, if not riveting theater.