September 8, 2014- For their inaugural production, the company of Chicago’s new Cole Theatre chose to tackle extremely challenging material in Mike Leigh’s Ecstasy. Originally produced in London in 1979, Leigh’s six-character play is typical of the playwright/screenwriter/director’s work in that it showcases the plight of lower-to-middle-class ne’er-do-wells in an often cruel, modern world that takes plenty of prisoners. The difficulty in presenting the play—especially in America—is rooted in its essentially British working class sensibility. The characters speak in varied U.K. regional dialects—mostly London’s thick Estuary English. American audiences might yearn for subtitles; however, one’s ears grow accustomed to the “foreign language” as the play progresses.

Another hurdle in mounting Ecstasy is the play itself. The first act hurts—it depicts a young alcoholic woman, Jean (courageously and vulnerably played by Maura Kidwell), who lives in a drab London one-room flat, lives a meaningless existence, and has casual sex with the wrong men (in this case, a married man from around the corner). Jean’s world erupts into violence when the man’s wife discovers him in the flat. Then, the second act is completely different in that it is: a) twice as long as the first act; b) is often hilariously funny; and c) seems to belong in a different play. This nearly-90-minute act is the setting for a late-night reunion party, the participants being old friends from school—Jean, her married friend Dawn (Michaela Petro), Dawn’s husband Mick (Boyd Harris), and socially awkward and divorced Len (Layne Manzer).

The quartet proceeds to get blisteringly drunk, sing songs, reminisce, and otherwise revel in their empty reality. It really doesn’t sound like a good time at the theater, but in fact, it is riveting.

Superbly and sensitively directed by Shade Murray, the play is staged at the Red Orchid Theatre—a small and intimate space that is perfect for the piece. The audience feels as if they are right there in that shabby flat (even the drip-drip sound of a leaky faucet, present throughout the evening until the very end when Len finally fixes it). You wince at the  violence and you are positive that you smell the the tobacco, and the booze. You feel the  characters’ pain, their superficial joy attained by alcohol, and the desperation that hovers like a cloud over the dead-on set design by Grant Sabin.

The success of this play hinges on the quality of the performances, and in this case they are exceptional. Some of the best acting work that Chicago has to offer can be seen in Ecstasy, no holds barred. It’s Kidwell’s evening through-and-through, and her delicate fragility is palpable; her portrayal of Jean is heartbreaking. The moment in which she sings “Danny Boy” will send chills up the spine. It’s the defining couple of minutes of the production.

Petro’s Dawn is a lot of fun—hers is the showy role; funny, wild, and exasperating at times. Harris is fabulous as Mick as he displays the right amount of coarseness and empathy. Manzer is a standout as Len—while endearingly amusing, he is also, at heart, the lost soul who might very well be Jean’s savior. In smaller roles, Joel Reitsma as Roy (the married man) and Lauren Pizzi as Val (his wife) display a physicality that is both shocking and real.

This is visceral, powerful stuff. By the end of the evening, the audience has been put through the wringer and left to ponder why Mike Leigh ironically titled the play Ecstasy.

Easily one of the best things on the Chicago stage this season, Ecstasy runs until September 28 at the Red Orchid Theatre in Chicago’s Old Town. 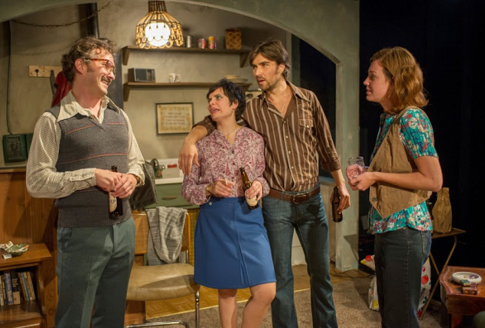