Cast of Pop Waits by the Neo-Futurists (photo by Joe Mazza). 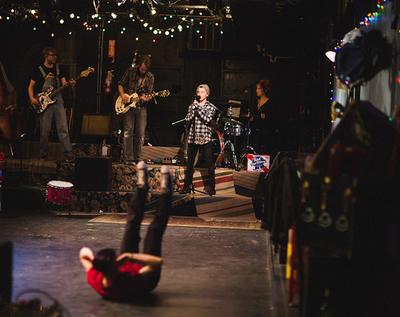 March 7, 2016 - Way back around 1980, my friends and I used to go to a punk music club in Chicago called The Space Place. You would pay your three bucks, walk to the third floor and listen to live punk bands play live punk music. It’s worth noting because it was real and raw and early enough to legitimately be categorized as part of the original punk movement in the United States.

Fast-forward to February, 2016 and the Chicago theater troupe The Neo-Futurists’ staging of a production called, Pop Waits. Here, I use the word “production” in place of “play” because there’s nothing anyone might traditionally call a script happening in the 90-or-so minutes that Pop Waits lives, breathes and flirts with death on the Neo-Futurist stage. And I mention The Space Place because, despite being old enough to remember the birth of punk and young enough to desire an honest rebirth, I’ve seen little deserving of the title until this show.

Molly Brennan and Malic White, the two creative powerhouses behind Pop Waits, might call their show punk even if a punk renaissance isn’t their aim. The show is simple: a rock band just offstage providing accompaniment, soundtrack and adrenaline to the loose narrative of Brennan and White (real life partners offstage). There’s monologue, dialogue and songs. Brennan and White tell true, personal stories as well as the moving story of how they met each other. The older Brennan, a veteran of Chicago stages, crafts songs that epitomize the bluesy, guttural, avant-garde world of legendary singer-songwriter, Tom Waits (the rights to use Waits’ music was not attainable by opening, so Brennan performs her own brilliant songs in the Tom Waits’ style). The younger White lives and breaths the music of rock’s original punk, Iggy Pop (categorized as punk now, the label didn’t exist when he started). Each tells their respective stories in the style of their respective musical heroes.

Great choices, by the way. No one would call the gravelly slur of Tom Waits’ music “punk,” but punk is a fitting ideology. An outsider might categorize him with Frank Sinatra or Tony Bennett but my parent’s crowd would almost certainly find his music way more experimental, which is part of why I love it (no intended slight to the greatness of Bennett or Sinatra). Remember, the most significant thing punk rebelled against was rock and roll itself. Because, by the mid-1970’s, rock and roll had ceased being the connective voice for young angst that it was in the 1950s and ‘60s. Now Alice Cooper was playing golf with Bob Hope, and Led Zeppelin was being carted around on their own private jet: rock became more status quo than the GOP. Punk saw the hypocrisy; punk was rock pissing on rock.

This winter at the Neo-Futurists I saw theater pissing on theater. And it worked. And I’m so grateful. (Keep in mind that’s my own take. I believe White and Brennan have way more love in their hearts than that.) These two brilliant ladies use music and theater as an imperative—and I don’t see an overabundance of theater doing that these days.

Pop Waits’ simple reason for being is to share with us music’s magic answer to our own desparations. It works for Brennan and White, and they’re kind enough to share it. These two women have led pained lives, especially Brennan, who suffers severe chronic pain from a degenerative nerve disorder which would cause many to shut down completely. Medication—prescribed or otherwise—helps little, so it is White who has become Brennan’s life raft—White who keeps Brennan rooted in reality, correcting her when the fantasy narrative she creates to keep her going threatens to overcome her sanity. Both White and Brennan have stripped themselves of female pretense and arise all the more beautiful because of it. Both have shaved heads (White does allow a short plot of hair to rise above her forehead) and wear butch clothes. The band is wonderful and director Halena Hays has worked magic in keeping the show as tight as a set of punk music played by bands like DV8 and Screamin’ Rachel and Remote at The Space Place in 1980. And she does strap a narrative around the thing (bless her), so the show never feels like a loose-cannon or theatrical excuse to sneak rowdy music onstage.

One of the goals for us who went to The Space Place was to pack the dance floor with enough swaying humans to make the floor roll like jelly. And it did. We were probably flirting with horrific disaster and never knew it, but we lived for that sensation, when the music was so powerful that the audience became one with the band and even the building; our own personal anxieties melted into an unstoppable present tense. The Pop Waits audience stormed the stage twice in the show I saw, conveying the same intensity. I know it was part of the show—the audience was invited to do it. But the whole thing rejuvenated me in a way theater rarely does. And I’m not saying all theater has to be this all the time but, when so much theater is none of this ever, I’m grateful that, for 90 minutes, the Neo-Futurists were all of it, all the way, every second.