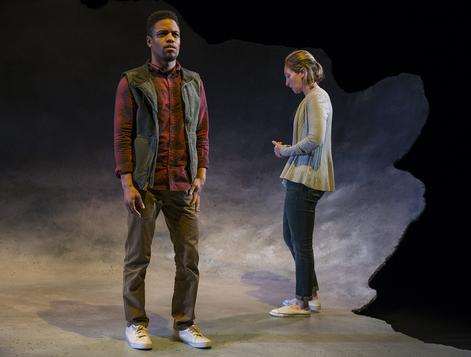 THEATER REVIEW: By Daniel A. Scurek

June 11, 2016 - An old television commercial once told us that we, “never get a second chance to make a first impression.” True story. When we meet someone new, we instinctively know this. We know that everything we do and say in those first few moments will shape all that follows: a careless word, a bad joke, a roll of the eyes and what might have been a perfect match ends up as a missed opportunity. But what if life came with an endless amount of “do-overs” until you got it right?

That’s the question English playwright Nick Payne poses in his play, Constellations, currently in its Chicago premiere at Steppenwolf Theatre. We meet boy and girl as they meet each other on, essentially, a blank stage—save for the giant conch shell the pair occupy for the show’s 80-minutes. Rolland is handsome, young, kind, a bee keeper. Marianne, a theoretical physicist, is likewise young and attractive, demure but ready for something romantic. Their attraction is mutual and the show’s one constant. Everything that follows changes.

Anyone familiar with American playwright, David Ives’ 1988 play, Sure Thing, knows what happens next: a do-over. In the famous Ives’ one act, a young man approaches a girl to see if the empty chair next to her is taken. The dialogue goes on a short bit until the boy says something stupid, a bell tings, and the scene starts over. The play progresses as each further attempt intersects with new mistakes, a ding, then the chance to go back just far enough to fix each new screw-up.

​Likewise, the Constellations pair progress up to a point then the scene begins anew but veers into a different direction. In all, we’re treated to seven separate scenes. The tone is more bittersweet than Ives, as our couple grapples with a serious future, complete with terminal illness and its potential outcomes.

The success or failure of such a piece rests so much on the actors’ abilities to attack each reboot at the proper level of gusto. Things get tricky; they don’t always go back to the beginning. And, of course, sometimes things turn sour. Jon Michael Hill plays Roland with grace and simplicity. The kindness and love he offers fits every scenario. Likewise, Jessie Fisher’s Marianne becomes a kind of everywoman for anyone who’s had the guts to take a chance outside their comfort zone. As the more conservative of the pair, she earnestly plays her yearning for Roland with the kind of focus one might reserve for a sure thing, which brings me back to Ives.

When David Ives wrote Sure Thing in 1988, he hit upon something. What if we could choose our fill of dress rehearsals, rewriting each moment the instant that moment goes awry? Payne does a nice job with the possibilities and Steppenwolf keeps everything smooth for an enjoyable night of theater. Both actors bring such calm focus to the stage that we feel so much a part of their intimacies that the worn cliché of “we cared about the characters” actually rings with a note of sincerity; we’re quite cozy with these two—we get excited about the possibilities.

​​Payne is adept at revisiting the place Ives got to almost 30 years ago. Vividly signifying shifts from one do-over to the next, we rapidly begin to see that perseverance is king and that our best bet is to keep trying—perhaps even if we don’t actually get do-overs; if you want it badly enough, you’ll get there.