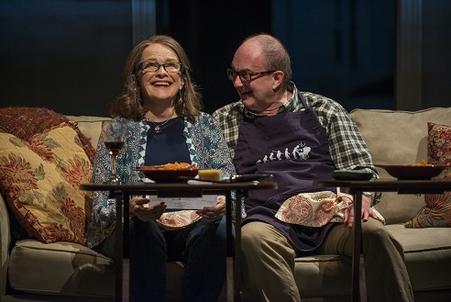 May 2, 2016 - Steppenwolf Theatre’s new production, Mary Page Marlowe, feels a lot like a character study (perhaps even moreso than it does a play), but strong acting and non-linear structure make for a strangely compelling theatrical experience.

Featuring six actresses in the title role, playwright Tracy Letts' script starts in the middle and moves us back and forth in time as we learn more and more about the life of Mary Page Marlowe. There's no story in particular inasmuch as most of us live fairly ordinary lives, and Mary Page is as ordinary (and extraordinary) as anyone. There's triumph and tragedy, relationships that are successful, and others that are fraught. Mary Page experiences her fair share of drama but not more than the average person. Perhaps it's a different life than many theatergoers live. And then again, perhaps it’s not.

Steppenwolf has enlisted a fairly large cast to bring Tracy Letts’ newest work to life, even large by Steppenwolf standards: 18 actors in total, most of whom appear in only one scene. And while that's certainly a decent size cast, what's more impressive is the talent that comes with that ensemble.

​All of the women playing Mary Page Marlowe are tremendously gifted. It comes as no surprise that stage and screen veteran Blair Brown is full of nuance and color as an elder version of the title character. Brown is a delight to watch, and her scenes seem to end just before we're ready to say goodbye. Caroline Heffernan, the youngest actress to play Mary Page, more than holds her own with such a seasoned group of performers. Miss Heffernan's performance is honest and thoughtful, and anchors the character's youth just as Brown's performance grounds Mary Page's final years in verisimilitude and loveliness.

The rest of the ensemble is equally strong. Amanda Drinkall as Mary Page's mother, Roberta, manages to create a complex, three-dimensional character in only two short scenes. Likewise, Stephen Cefalu, Jr. as Mary Page's father, Ed, makes a lasting impression as he sings a haunting, heart-breaking lullaby to the infant Mary Page.

There's a bit of heartbreak throughout the entire production, actually. It's not a happy play, and the tone of the design choices are as moody as the acting and the subject matter it covers. Richard Woodbury's sound design is filled with careful, spare choices that reinforce the bleaker qualities of the script. The successful collaboration between Marcus Doshi and Todd Rosenthal on lighting and scenic design, respectively, offers an interesting visual parallel to the figurative puzzle of Mary Page Marlowe's story.

​Indeed, it is a bit of a puzzle, and for some audiences Mary Page Marlowe may be a mystery they don’t necessarily have to see solved. It's a play that just...is. But it allows us to see ourselves or some element of life that is universal to us all play out before us, giving us the luxury of absorbing the journey for the sake of the journey. Sure, Mary Page learns a few things throughout her life. She has some nice times. She has some terrible moments. There are some big defining moments, and there are scenes when she just enjoys watching House, M.D.

Mary Page Marlowe doesn't really take us anywhere in particular, but just as Mary Page learns, sometimes it's satisfying just to have taken a journey...somewhere—and perhaps, in this case, we get to cogitate just what that universal journey might mean to us.