June 2, 2015 - The Fantasticks may hold the record for the world's longest-running musical, but Light Opera Works' luscious production looks and sounds as fresh as ever. With a 23-piece orchestra—the largest in the show's 56-year history—The Fantasticks is everything good theater should be: though-provoking, beautiful and memorable.

Though productions of this well-loved musical are traditionally on the smaller side (the original production was in a tiny black box theater, and the orchestra consisted of only a piano and a harp), Light Opera Works has pulled out all the stops. The show was performed this spring at Northwestern University's Cahn Auditorium—not a huge venue but a space that's significantly larger than the cozy theaters that hosted the original and revival productions in New York. Book writer and lyricist Tom Jones has gave his blessing to the expansion, calling Cahn Auditorium “a perfect space for elaborate scenic staging, while still relying on the imagination of the audience.” And that is exactly what the production has done.

Scenic designer Adam Veness fills the stage with gorgeous sets. Traditionalists may argue that The Fantasticks requires virtually no scenery, and they'd be correct. However, Veness' choices are spot on—simple and effective touches that don't muck things up by getting too fancy. Clever uses of fabric and some terrific collaborations with lighting designer Andrew H. Meyers on practical lighting effects are just enough to bring out the inherent loveliness of the story.

Director Rudy Hogenmiller finds other delightful ways to expand the staging without overdoing it. Of particular importance to the production's fresh take is the role of The Mute. Always a memorable part, The Mute is essential to the success of the little extras contained in this bigger and better version, and Clayton Cross is just the right person to bring the silent character roaring to life. A gorgeous and gifted dancer, Cross makes the scene changes look like tiny ballets, and he is quite possibly the most talented confetti tosser ever. (Side note: God bless the running crew for sweeping up the copious amounts of confetti and snow that are scattered across the stage throughout the production!)

While The Mute has some of the most visually memorable moments in The Fantasticks, a silent character can't exactly carry a musical. Fortunately, the rest of the actors are also superior. James Anest is a confident and compelling El Gallo; Rick Rapp and Kirk Swenk are adorable and hilarious as the two scheming fathers (sort of like Jonathan Winters and Jack Benny as a comedy team); James Harmes was born to play Henry, the aging actor; and Brian Rooney is a hoot as Mortimer.  Meredith Kochan and Christopher MacGregor occasionally err on the side of brattiness as the young neighbors in love, but they manage to make up for a slight lack of honesty with their powerful voices and energy. All in all, the cast is strong and cohesive, and they are a delight to watch.

Though The Fantasticks definitely feels like a product of the 1960s, Light Opera Works' production doesn't feel at all dated. Instead, its beloved songs like “Try to Remember” and “Think It's Gonna Rain” feel like vintage gems that have been polished up for new audiences to discover and for longtime fans to fall in love with once more. 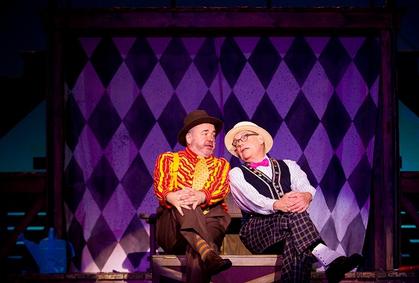