October 1, 2014 - The opening salvo of Steppenwolf Theatre Company’s new season is a dynamic character study of a motley crew of lonely souls in Dublin, Ireland. The loneliness that eats at the hearts of four of the five individuals in Conor McPherson’s The Night Alive is not overt. Attention is called to it only once in the one-hour-forty-minute-no-intermission examination of how people will grasp at straws—or, in this case, some freshly-cooked chips—in an attempt to bring something meaningful to their lives.

Tommy is a middle-aged handyman who is separated from his wife and teenage children. He lives in a dumpy, cluttered room in the house owned by his elderly uncle Maurice. He squeezes out a meager living with the help of his friend and “business partner,” Doc, who obviously isn’t playing with a full deck upstairs. Enter Aimee, a young, sometimes-prostitute. Tommy rescues her from an abusive boyfriend on the street, does the Good Samaritan thing, and brings the woman—who has a bloody nose and a black eye—to the house for the night. Awkwardness ensues, especially when Maurice finds out Aimee is going to stay for a few days (“There’ll be nothing but trouble!”). Doc is the one who warns Tommy that Aimee makes her living on the street. Tommy doesn’t care. Obviously there’s an attraction, on his part anyway, and he relishes in hiding her from the menacing Kenneth, who may or may not be Aimee’s pimp. Suddenly there is purpose in Tommy’s life, and he intends to make the best of it. That is, until Kenneth finds out where Aimee’s been kippin’ and comes around to wreak havoc.

Incongruously, Marvin Gaye has an important influence on the proceedings; after all, a poster of the singer adorns Tommy’s wall. Apparently a fan, Tommy begins an impromptu dance, in one of the production’s warmer moments, to Gaye’s hit “What’s Goin’ On?” And therein lies the central theme of McPherson’s play—that everyone in the story is wondering what’s going on in his or her life. It’s a bleak world out there, and they’re all reaching for whatever comfort they can seize.

That said, the play’s final moment is a satisfying one, given the story’s arc; however, one could argue that the ending is highly unlikely, given the real world.

Henry Wishcamper’s direction is superb; the staging creates a special world of squalor inhabited by oddballs, not to mention that the Irish setting is totally believable. Wishcamper carefully balances the humor—of which there is much—with the hopelessness.

Francis Guinan’s performance as Tommy is a revelation. A veteran of stage, television, and film for decades, Guinan carries the play with a strong, large presence and a heartbreaking vulnerability. Nearly stealing the show from him is Tim Hopper as Doc, but then he’s the one providing most of the comedy. The appearance of another veteran actor, M. Emmet Walsh, is a pure delight. Well-known for several iconic performances in films such as Blood Simple andBlade Runner, Walsh brings his signature voice, look, and attitude to the role of Maurice. His scenes are among the production’s highlights. In a small role, Dan Waller makes Kenneth one scary guy and plays it as if Sting has become a petty criminal and sociopath. With all this dynamic and powerful display of experience from the four males in the cast, Helen Sadler has a difficult job in bringing Aimee to life. She competently hits the right notes, but perhaps they’re just not as loud as those of her co-actors.

Todd Rosenthal’s ultra-realistic scenic design is marvelous. What appears to be a beautiful house in a lovely park-like area is appropriately marred by the rubbish dump that is Tommy’s flat—but at least it has running water! Keith Parham’s lighting is mostly effective; however, there is a long, extended scene that takes place in very dim illumination—it’s difficult to make out much of what is happening on the stage. A minute or two of this is all right, but ten or more is eye strain.

The Night Alive is a fine bittersweet comedy-drama that showcases Steppenwolf’s ability to mount a credible, foreign slice of life in its marvelous Downstairs Theatre. It runs from September 18 through November 16. For schedule and tickets visit www.steppenwolf.org or call 312-335-1650.

Francis Guinan a Revelation in Steppenwolf's The Night Alive 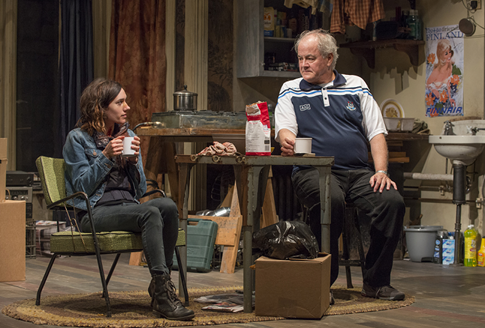