Timeline's The Price Examines the Trouble With Burying Baggage From the Past
THEATER REVIEW: By Daniel A. Scurek 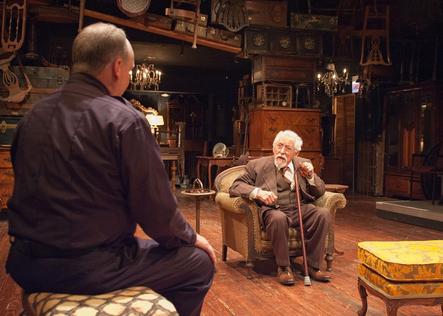 October 12, 2015 - Arthur Miller had a real knack for writing plays about the American Dream gone sour, not because the dream is unattainable but because the realities his characters create to cope with bad choices paralyzes them; who they are is in conflict with who they want to believe they are. The only way out of this emotional conflict is to stay ignorant.

​Miller’s infrequently staged drama, The Price, currently revived at Timeline Theatre in Chicago, revisits his familiar theme of a life ruled by a painful past. In fact, the past shapes his characters’ lives so much that it almost seems like its own character. Although the play takes place in 1968, it’s a kind of time capsule of the Great Depression, a world Miller often frequented and the major ruling event of the characters’ lives. And this production makes an excellent case for re-examining this work and the tumultuous time period it covers.

Brothers Victor and Walter Franz haven’t spoken to each other since their father’s death years before. Nor have they really dealt with the impossibly large amount of potentially valuable furniture collected in the old family brownstone. Now the city plans to tear the building down, so the brothers have to get rid of everything and deal with the past. The play opens with Victor and his wife, Esther, waiting for an appraiser, hopeful that they can get a great price for all the family belongings. They are less optimistic that Walter will show up to be a part of the process. But he does and the main action revolves around the brothers’ unresolved issues.

The strength of the script is in Miller’s keen sense of classic structure; every consequence has an origin, and he makes sure we see just how the pieces connect. Timeline’s production succeeds because the actors clearly have the skills to relive those critical life events so strongly that we believe their burdens to be real.

Surely the centerpiece is the excellent portrayal of the loveable and shrewd appraiser, Solomon, by the definitive veteran Chicago actor, Mike Nussbaum. But the work of the other cast members, Bret Tuomi as Victor, Roderick Peeples as Walter and Kimberly Mellen as Esther, is equally excellent. Miller’s writing relies so heavily on dense dialogue and continuous exposition that the script could easily become excessively talky. But the actors keep the imperative of resolving the past as the driving force behind the conversation as they search to understand themselves and each other.

​Louis Contey’s impressively tight direction and clean staging drive what could easily dissolve into chaos. Mention must go to set designer Brian Sidney Bembridge, who creates a world of stuff while allowing room for the actors to act. Most of the clutter rests brilliantly above the upstage area, with a seemingly infinite collection of various furniture pieces locked together like the finished product of a three-dimensional game of Tetris.

But the real clutter exists in the lives of these characters. The greatest accomplishment of Miller’s script and Timeline’s production is showing us the price we pay isn’t really the weight of the physical stuff but how our dreams sour when our psychological baggage keeps us from clearing the path blocked by the pain of our past.

The Price runs at Chicago's Timeline Theatre through November 22, 2015.

Victor Franz (Bret Tuomi, left) wants to get a good deal from antiques dealer Gregory Solomon (Mike Nussbaum) in return for an attic full of his family's possessions in TimeLine Theatre's revival of The Price by Arthur Miller, directed by Louis Contey through November 22, 2015 (photo by Lara Goetsch).
​