Windy City Playhouse’s inaugural season continues with the sexy, fun and thought-provoking Things You Shouldn’t Say Past Midnight. Running through October 4, the smartly-designed and directed production is worth the trip to Chicago’s North Center Neighborhood.

Three couples, three bedrooms and countless relationship challenges give the talented ensemble plenty to work with. And work they do—in less than two hours, the audience is taken on a whirlwind of late-night sex, lovers’ quarrels, and all the fallout that follows. Though the production touches on some serious topics and includes some graphic (though carefully choreographed) sex, it remains surprisingly light and entertaining at heart.

Lighthearted entertainment is, in fact, at the core of Windy City Playhouse’s mission. Artistic director Amy Rubenstein’s message to the audience is that she wants to create high quality, highly entertaining art. With Things You Shouldn’t Say Past Midnight, the company has achieved just that. The production is gorgeous to look at: Kevin Depinet’s scenic design scatters three bedrooms throughout the space, each designed perfectly for the character to which it belongs. Likewise, Kevin O’Donnell’s sound design goes a long way toward putting the audience in the mood for the silly/serious show that unfolds. Clearly Windy City Playhouse cares a lot about production values.

The company also cares a lot about hiring talented actors, and Windy City Playhouse has found some really gifted performers for this production. In less capable hands, the characters in Things You Shouldn’t Say Past Midnight could easily become unrelatable caricatures. This ensemble, however, is tight, and their work together is lively and passionate. Every single actor has a stand out scene in the show, and each of them is squarely in the moment as soon as the lights come up.

Beyond creating quality theater, Windy City Playhouse is aiming to make the theater-going experience simple and satisfying for audience members who live in the neighborhood as well as for folks who make the trek all the way out to their location at Irving Park and Sacramento. There aren’t a ton of places to grab a bite and relax with a drink over there, but you can do all that in the theater’s tastefully decorated lobby. Their menu goes well beyond the usual house red and white wines and the tiny beer selection at most venues. In fact, there’s a full bar and a pretty decent menu of nibbles. What’s more, you can text your intermission order to the bartender before the show starts, and it’ll be waiting when Act 1 is done.

The theater space itself offers audiences a comfortable experience with two seating options: Top Shelf which provides comfy swivel armchairs and side tables or House which is more like movie theater seating. With the current set up for Things You Shouldn’t Say Past Midnight, some Top Shelf seats are very near the action of the show. Though the aesthetic distance is short, audience members who are close to the action seemed to get a kick out of it.

Is Things You Shouldn’t Say Past Midnight going to change your life? No. But it’s an awful lot of fun in a theater that’s working hard to bring fun to the Windy City.

Sexy and Fun, Things You Shouldn't Say... Balances Wit and Weight in an Entertaining Show 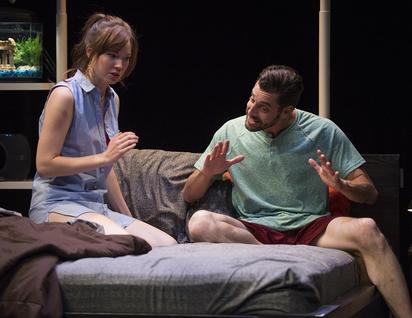