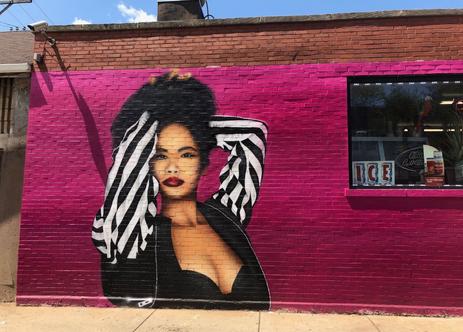 Asend, the Chicago-based urban artist who generated headlines earlier this year for his poignant mural of Selena in Pilsen, has won a competition between street muralists at Hotel Chicago West Loop – the three-year-old independent that is re-imagining the boutique hotel experience with its immersive “Annex” art program.  The dual-purpose gallery/hotel hosted an opening reception for its Annex | Murals exhibit in late November where the public and a juried panel voted on their favorite street murals (inside guestrooms) created by 10 leading Chicago urban artists.  As an award, Asend will receive a $20,000 stipend and a massive 4-story mural project on the hotel’s outside wall to be completed in spring 2020.

“Having my work inside guestrooms allows the public to connect with my art on a personal level, away from distractions of large crowds,” said Asend, who has also painted two other street mural guestrooms at Hotel Chicago West Loop.  “It can be appreciated during a quiet and comfortable alone time during a stay.  Likewise, my goal with the exterior mural in 2020 is to continue to welcome guests by giving them a window into our city through art.”

​Asend’s focus for his winning mural was to create an experience.  Tourists usually see images of Chicago’s skyline from afar, but he wanted to give hotel guests the feeling of what it’s like to be inside Chicago’s vibrant downtown streets, especially at night.  When a visitor walks into the room they are transplanted onto State Street staring at the legendary Chicago Theatre and the orange city lights that blanket the city.  The remaining walls are painted in a similar tone that bring out the rich colors of an inner-city nightscape. The composition is key:  the point of view comes from the middle of the street, between the hustle and bustle of buses, taxi cabs and nightlife goers.  The bed placed in the middle of the oil painting gives a sense of immersion and inclusiveness.

​“Asend’s newest contribution to the Annex is nothing less than mesmerizing,” said Hotel Chicago West Loop General Manager Jean-Luc Laramie.  “His spin on the iconic State Street cityscape will give guests an out-of-body experience without ever leaving their hotel room!  We are honored to next have Asend adorn our 40-foot outside wall with his ingenuity and further elevate the hotel’s position in Chicago’s art community.”The groundbreaking Annex | Murals exhibit adds a unique element to the typical “art hotel” theme by pulling visitors beyond the public space and into the guestrooms for viewing floor-to-ceiling wall murals.  When not in use, the featured street mural rooms (14 total and counting) are open and on public display – as is the rest of The Annex in effort to produce an alternative gallery experience for visitors.  Besides the exterior, Hotel Chicago West Loop plans to eventually decorate the majority of its 116 guestrooms with original street mural artwork.