The City of Aurora's reputation as a Midwest destination for the arts just got a huge boost with the announcement of a tax credit award worth over $15 million from the Illinois Housing Development Authority (IHDA) toward the development of the Aurora Arts Center at the former Waubonsee Community College Building downtown.

The $35 million project will be developed by The Community Builders Inc. and consist of a first­ class restaurant as well as a Paramount School for the Performing Arts to serve Aurora's growing artistic community. In addition, the Joseph Corporation building at 32 S. Broadway in Aurora would receive a major capital upgrade. The Waubonsee building has been vacant for about five years and is located directly next door to the Paramount Theatre at Galena Boulevard and Stolp Avenue.

Invest Aurora purchased the building earlier this year for $350,000 in order to facilitate the development of the Arts Center. "What we're doing here is preserving history, legacy and beauty, while moving the city toward a brighter future," said Aurora’s mayor, Tom Weisner. "This is part of an overall game plan that enhances and leverages the arts to create jobs, brings dollars to downtown, create tax revenue and helps strengthen our community in the long ­run."

"Combining investment in arts, education, recreation, and quality housing is a proven winning formula for downtown revitalization. But it's been Aurora's thoughtful and consistent execution of this strategy that attracted us most," said Will Woodley, development director for The Community Builders. "The Community Builders is honored to play a role in downtown Aurora's continued resurgence and thankful to IHDA for now joining in that effort."

​The Aurora Arts Center would also include artist­-targeted loft apartments similar to the successful Cornerstone Apartments, another development by The Community Builders located in Chicago's Bronzeville neighborhood. Like Cornerstone, the Aurora Arts Center's 38 rent restricted, loft­style apartments will give a strong leasing preference to those working at least part time in the arts.

The center will also include four dedicated apartments for exclusive use by the Paramount Theatre for out­-of-­town performers and directors involved in its Broadway Series. Within the new development, the Paramount's Performing Arts School will occupy about 30,000 square ­feet of the large building.

Thanks to the Broadway Series, the Paramount's annual attendance now exceeds 300,000 and the Arts Center is estimated to bring an additional 150,000 new visitors to the downtown each year. Officials believe the project will continue to spur restaurant and other development downtown and is believed to be a perfect complement to patrons of the Paramount.

​"It's remarkable the amount of enthusiasm there is right now for development in downtown Aurora including the arts center," said Tim Rater, president and CEO of the Paramount Theatre. "The possibilities for the continued transformation of this great downtown just seem limitless. It's a really exciting time in Aurora and we're glad to be a part of it all."

​The majority of the project would be paid for by private investment that is facilitated by a variety of federal tax credits. Normally, the city will go up to 20% assistance for projects within a TIF District, but this project is ultimately requiring a city contribution of 5% of the total project, which means that the project is leveraging a $19 to $1 return on investment.

Once completed, the newly built lofts will be made available to single artists with incomes up to $32,000 per year and $37,000 per year for couples. Residents are allowed to remain in their homes over time as their income improves.

​"It's not often the City Council gets to consider a $35 million project downtown," added 6th Ward Alderman Mike Saville. "This development proposal would insert the arts structurally, laying a foundation for the arts community."

The former Waubonsee Community College Building in Downtown Aurora (photo courtesy of The City of Aurora). 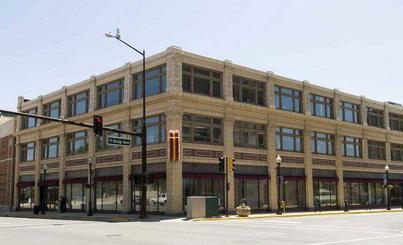