Muddy Waters mural by artist Eduardo Kobra on State Street in Downtown Chicago (photo courtesy of the City of Chicago and the Department of Cultural Affairs).

The Department of Cultural Affairs and Special Events (DCASE) and the Chicago Loop Alliance will host a dedication ceremony for the spectacular Muddy Waters mural at the corner of State and Washington Streets in Chicago’s downtown. The dedication will feature a performance by the Muddy Waters Legacy Band featuring Muddy’s sons Mud and Big Bill Morganfield and former band members, including John Primer, Rick Kreher, Studebaker John and Edward McDaniel, among others. There will also be a speaking program anchored by world-renowned artist Eduardo Kobra.

Muddy Waters, the artist who electrified the Chicago blues, arrived in Chicago as a part of the “great migration” of African Americans from the southern United States to Chicago in the late 1930s and ‘40s. He transformed the Delta blues into the Chicago sound that has influenced generations of musicians like the Rolling Stones, Eric Clapton, Led Zeppelin, Buddy Guy and countless other blues, jazz and rock-n-roll artists.

​Eduardo Kobra, an internationally acclaimed Brazilian street artist, created the nine-story mural of Chicago blues legend Muddy Waters in the Loop. The mural is located at 17 N. State Street and is visible along State Street at Washington Street. For his mural, Kobra was assisted by a team of three Brazilian visual artists and completed the work in just over two weeks on Friday, May 20, 2016. Mayor Rahm Emanuel and DCASE have designated 2017 as the Year of Public Art in Chicago—and the Muddy Waters Mural, created as part of the Wabash Arts Corridor established by Columbia College Chicago, is a wonderful addition to the city’s arts scene.

The dedication is being held as a kick off to the Chicago Blues Festival, June 9-11 in its new home, Millennium Park. For more complete details and festival schedule, visit chicagobluesfestival.us. 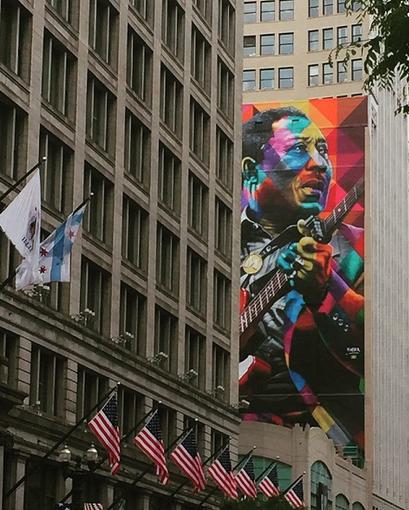