October 10, 2014 – On a Friday afternoon early this month, the Chicago Symphony Orchestra gave a mid-day concert—a wonderful way to spend the post-lunch hours to kick off the weekend. The program was not originally intended to be a binary tour of concert hall classics, but with conductor Jaap van Zweden out with an injury, Mahler’s Symphony No. 5 was paired with Mendelssohn’s Violin Concerto in E Minor, Op. 64, rather than the more adventurous Béla Bartók Rhapsody Nos. 1 and 2 for Violin and Orchestra. Donald Runnicles, who graciously stepped in at the last minute to lead the three performances (October 9, 10, and 12), requested the Mendelssohn, not having the Bartók in his repertoire. With the Mendelssohn being rather ubiquitous in contrast with the infrequently performed Bartók, the change may have left some attendees a little disappointed. However, it did offer an opportunity to hear a world-class performance of Mendelssohn, and the Chicago Symphony Orchestra’s own concertmaster, Robert Chen, gave a marvelous reading.

Chen and the CSO created a gorgeous slow blossom of the familiar opening phrases of the Mendelssohn, and successfully made small adjustments in the tempo that emphasized its overall passionate mood without slipping into sentimentality. This can be difficult to achieve, since the concerto can easily slip into a superfluous, overwrought gushing if not balanced by some restraint. The Andante seemed to be paced at a slightly more brisk tempo than other interpretations, but it managed to work by layering over the inherent beauty a kind of dance-like feeling. It removed some of the reverie but added a distinct sweetness. There seemed to be some extremely minor issues with the ensemble’s uniformity in the final movement, but overall Chen and the orchestra played up the soaring qualities of the score, and concluded the work to a standing ovation from the Symphony Center audience.

Mahler’s Symphony No. 5 encompassed the second half of the afternoon program, a composer whose works are always heartily welcomed by CSO audiences, due, largely in part, to the fact they play up the marvelous talents of the orchestra as a whole. Punctuating the reason why live performances cannot be replaced by recordings was the astounding slow descent and build that the orchestra crafted in a moment of the first movement, which somehow managed to communicate a visceral friction in the air, of resistance—through sound production alone. The only disappointment here was a slight lack of silky finesse at the end of some of Chris Martin’s trumpet solos just before the conclusion of the opening movement. A particularly remarkable moment came in the Adagietto, which sounded as if it were hovering with no real direction. Other performances sometimes give forward propulsion, but here, Runnicles was content to allow the music to float like a feather caught on an indirect breeze. As soon as the symphony ended, the audience leapt to its feet and applauded for several curtain calls. Humorously, Runnicles finally physically grabbed the arm of the concertmistress in indication the orchestra should leave the stage—otherwise, the applause might have likely continued for the complement of the afternoon. 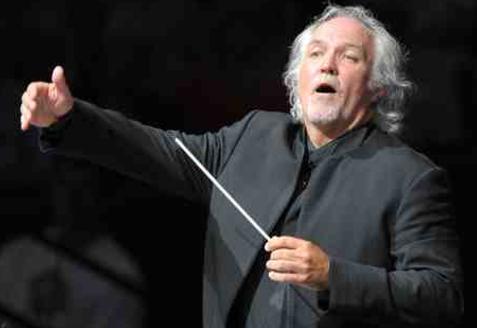