Conductor Nicholas Kraemer conducted the Music of the Baroque Orchestra and Chorus in a program of Mozart's Requiem Mass and some rarely heard gems by Haydn and Beethoven at Harris Theater on October 19 and 20, 2014 (photo by Jim Steere).

October 20, 2014 - A packed Harris Theater greeted Music of the Baroque’s orchestra and chorus as they opened their 2014-2015 season. On the program were two long standing staples of their repertoire, Wolfgang Amadeus Mozart’s Requiem Mass and Linz Symphony (No. 36), and two rarely performed pieces that were making first appearances on a Music of the Baroque program: Franz Josef Haydn’s Te Deum, and Ludwig van Beethoven’s Elegischer Gesang.

Opening the evening was the ensemble’s premiere performance of the Te Deum, an ebullient piece written at the request of Austrian Empress Marie Therese, which was presented beautifully, if wanting just a little bit in balance and clarity between orchestra and chorus. A solid performance of Mozart’s Linz Symphony followed. These are clearly wonderfully talented musicians with technical prowess to burn. Yet, the first two movements of the symphony passed without a great deal of nuance and emotional dynamics, and it was not until the third movement, consisting of a minuet and trio, that one sensed a shimmer of real interpretive magic. This, much owing to the fact Music of the Baroque’s principal guest conductor, Nicholas Kraemer, brought out the distinct pulses of the dance movement, that bestowed a kind of propulsion and purpose that was perhaps needed earlier. A bit more nuance with dynamics would also have been welcomed throughout the duration of the work.

After intermission came one of the real gems of the evening, an extremely rare performance of Beethoven’s brief and Elegischer Gesang for chorus and orchestra written in memory of the young wife of one of his patron’s who had died in childbirth. The work was superbly performed, and was a fantastic programming decision as a prelude to the requiem. The program requested no applause at its conclusion to sustain the reverent mood straight into the pleading first notes of Mozart’s Requiem. As the piece began, a surprisingly rapid tempo emerged, and sustained, throughout the whole of the Requiem performance. It was not an unwelcome decision, but the speed slightly altered the mood of the work, taking away the gloss of mournful solemnity and leaving behind ceremonial melancholy.

As a matter of fact, balance was the true undoing for this program. Kraemer may have underestimated the sheer size of the Harris Theater stage. But at the end of the day, cultivating musical uniformity is as much a part of a conductor’s responsibility as anything else. And utilizing the concert space’s inherent attributes plays as big a role in that process as employing the talents of the finest musicians. 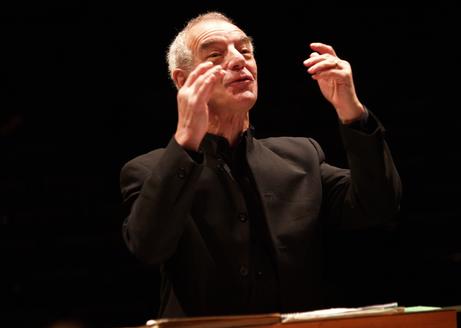