Collaboraction Theatre Company, Chicago's social issue-driven contemporary theater, is tackling mental illness this fall with the world premiere production, The Mars Assignment, a work that explores the subject of depression and its many stigmas.

Written and directed by Ronan Marra, former co-artistic director of Signal Ensemble Theatre, and created in collaboration with noted Chicago theater artist and Collaboraction company member Elsa Hiltner, The Mars Assignment shines a light on the presence of depression in contemporary society and the stigmas that continue to keep friends and loved ones from seeking treatment for their mental illness.

Just last month, JAMA Internal Medicine published survey results that found less than a third of people who said they were depressed had been treated for their symptoms. Drawn from research and interviews, The Mars Assignment puts a human face on a serious and sensitive topic few really want to confront, offering an entry point for recognition and conversation about a public health issue experienced by more than 19 million Americans, or nearly 10% of the population.

"People with depression are usually placed in exploitative roles in theater and film - meaning that the characters are often used to create the crisis or arch of the plot through destructive addiction, self-harm, or a suicide attempt," says Hiltner, who was inspired to start the process to create The Mars Assignment.

"We specifically set out to create a show that showed realistic characters living with depression in the way that millions of people do. Living the 'everyday' and navigating stigmas, without leaning on the stigmatizing tropes of suicide and addiction."

Reader will note that NAMI (National Alliance on Mental Illness) will be participating in post show talkbacks. Post-show comedy nights are scheduled Saturday, October 29 and November 12.

Collobraction's World Premiere, The Mars Assignment, Tackles Tough Issue of Mental Illness and its Many Stigmas 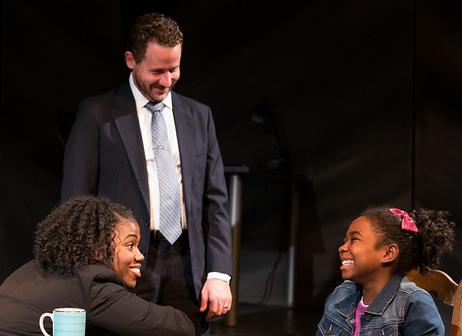