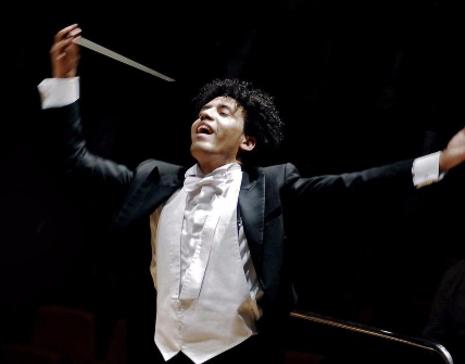 The program opens with Bernstein’s Symphonic Dances from West Side Story, a suite adapted from Bernstein’s score to the 1961 Academy Award-winning film directed by Robert Wise and Jerome Robbins. The story of star-crossed lovers set in 1950’s New York unfolds on a unique musical backdrop that fuses classical music, distinctive Latin rhythms and jazz and represents one of Bernstein’s most iconic works. This is one of three programs during the CSO’s 2017/18 season that recognize the centenary of the birth of celebrated American composer Leonard Bernstein (1918-1990). The CSO performed Bernstein’s Symphonic Suite from On the Waterfront led by conductor James Gaffigan in October, and performs his Symphony No. 2 (The Age of Anxiety) with conductor Kent Nagano in March 2018.

The program continues with Mozart’s Bassoon Concerto. Written when Mozart was just 18, the lively bassoon concerto displays the composer’s mastery of melody and musical humor while showcasing the instrument’s remarkable agility, range and lyricism. Completing the program is Bartók’s Concerto for Orchestra. One of the composer’s best-known works, the five distinctive movements highlight the virtuosic capabilities and unique characteristics of each section of the orchestra with the musical material drawing extensively on the folk melodies and harmonies of Bartók’s native Hungary. Thematically, the Concerto for Orchestra explores the journey from darkness into light, moving from stern “Night music” in the first movement and to a thrilling Presto complete with a large-scale fugue in the work’s brilliant finale.

Following his CSO subscription concerts, Payare also makes his podium debut with the Civic Orchestra of Chicago, leading a program of works by Bartók and Mahler on Monday, January 22, 2018.  The distinctive driving rhythms and sharp dissonances of Bartók’s Suite from The Miraculous Mandarin, Op. 19 musically depict the disturbing experiences of modern urban existence and the dangers of materialism found in the grim story by Melchio Lengyl. Mahler’s Symphony No. 1 completes the program. The composer borrowed much of the work’s musical material from one of his early masterpieces, the song cycle Lieder eines fahrenden Gessellen, or Songs of a Wayfarer and it evokes a variety of settings including pastoral landscapes, a funeral procession and a glorious victory.

​Renowned for his musicianship and charismatic presence, Payare is among the most sought-after young conductors today. He is the Chief Conductor of the Ulster Orchestra in Northern Ireland, a position he has held since 2014, and succeeded his mentor Lorin Maazel as Principal Conductor for the Castleton Festival in Virginia in 2015.