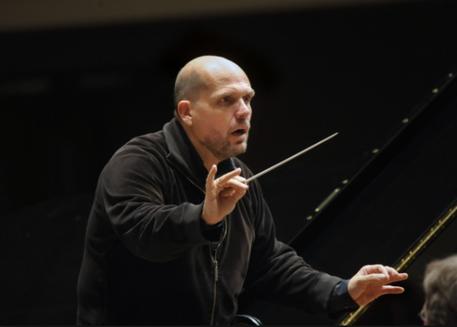 Acclaimed conductor Jaap van Zweden will be on hand as special guest of the Chicago Symphony Orchestra Association (CSOA) in their upcoming Fall in Love With Music benefit this fall (photo courtesy of the CSOA).

The League of the Chicago Symphony Orchestra Association (CSOA) will kick off its 2016-17 season of special events with the seventh annual Fall in Love with Music benefit event on Saturday, November 12, 11 a.m. at the Casino (195 E. Delaware, Chicago). This year’s benefit program will feature a conversation with special guest Jaap van Zweden, internationally renowned conductor and the New York Philharmonic’s newly appointed music director. The program also features a performance by members of the Chicago Symphony Orchestra (CSO) horn section.

​Jaap van Zweden has been music director of the Hong Kong Philharmonic Orchestra since 2012 and currently serves as music director of the Dallas Symphony, where he has served in that capacity since 2008, and released a recording of Mahler’s Symphony No. 3 in 2016. Named Musical America’s 2012 Conductor of the Year, van Zweden is one of today’s most sought-after conductors making guest appearances around the globe. He made his CSO subscription debut in 2008 and has been a frequent guest conductor for the CSO since that time. Along with his wife Aaltje, van Zweden also established the Papageno Foundation in 1997 to aid families of children with autism. Van Zweden will make his return to lead the Chicago Symphony Orchestra and Chorus in subscription concerts featuring the Brahms Requiem on November 10, 11 and 12.

Fall in Love with Music 2016 is chaired this year by CSOA League members Betsy Beckmann and Kathy Solaro. All proceeds from this event are used to support the League of the CSOA’s community and educational programs including the School and Senior Docent Programs, Youth Auditions as part of the Youth in Music Festival and Adventures in Music program.

​This year the brunch takes place at the legendary Casino, one of the oldest private clubs in Chicago. Established in 1914, the deep-green brick building at the corner of Delaware and Mies van der Rohe Way, was saved from the wrecking ball when the John Hancock Building was built and is noted for its Art Deco architecture, which adds to the ambiance of the club.

Tickets are available online at http://www.cso.org/FallinLovewithMusic.