Once Upon a Symphony, the Chicago Symphony Orchestra’s family-friendly, weekend matinee concert series for very young audiences (ages three to five), opens its season at Symphony Center with a production of Stone Soup. Presented in collaboration with Chicago Children’s Theatre, Stone Soup is the first of two Once Upon a Symphony productions offered in the 2017-2018 season. The program opens Saturday November 18 at 10 a.m. and 11:45 a.m., with additional performances taking place Saturday, January 20, 2018 and Saturday, February 3, 2018.

Stone Soup is the classic folk tale of a hungry traveler who arrives in a village with nothing but a large cooking pot. The traveler captures the townsfolks’ curiosity when he begins to make soup out of “just a stone.” One by one, the villagers begin contributing their own items to the soup, resulting in the most delicious soup any of them have ever tasted. The old folk tale is given new life as members of the Chicago Symphony Orchestra (CSO) and actor Alex Mauney teach young audiences the “delicious” and harmonious results of working together. The program features excerpts of works by Brahms, Wagner and Ravel.

The Elves and the Shoemaker features musicians of the CSO along with actor Jazelle Morris in the Brothers Grimm’s classic tale of a poor shoemaker and his wife who only have enough supplies to fashion one last pair of shoes. The couple is magically saved when a pair of perfectly crafted shoes appears and the satisfied customer pays twice the asking price. But who made these incredible shoes, and will it happen again? This creative musical and theatrical production of The Elves and the Shoemaker demonstrates the importance of helping others and the strength of connections we build by doing so, taught through riveting storytelling and music.

​Once Upon a Symphony, a program of the Negaunee Music Institute at the CSO, is created specifically for young children three to five years of age as a first step in a pathway of opportunities for young people to “grow up” with the CSO by introducing young children to classical music and the instruments of the orchestra. These programs feature compelling music performed by members of the CSO – who also have non-musical roles as characters – to help tell these classic stories, complete with enchanting costumes and sets in the inviting and accessible Buntrock Hall at Symphony Center.

​The interactive concert experience begins with preconcert activities facilitated by music educators from the DePaul University School of Music and concludes with a post-performance “Instrument Petting Zoo,” a unique opportunity for audiences to meet the musicians and instruments featured in the Once Upon a Symphony program, and to learn more about musical instruction at Chicagoland community music schools. In addition to the weekend performances, Once Upon a Symphony is also offered on select weekday mornings for preschool groups. Tickets for all CSOA-presented events at Symphony Center can be purchased by phone at 800‑223‑7114 or 312-294‑3000; online at cso.org, or at the Symphony Center box office: 220 S. Michigan Ave., Chicago, IL 60604.

Chicago Symphony Orchestra members in an original Once Upon a Symphony production (photo by Todd Rosenberg). 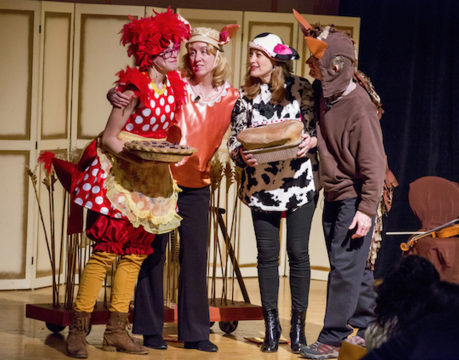