Angie Hauser, front, Bronwen MacArthur, back, and the Bebe Miller Company in rehearsal. 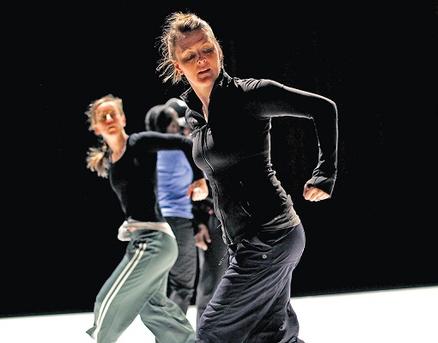 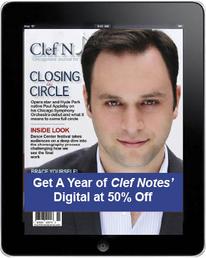 This season, as a unique cap to its 2017-2018 season, The Dance Center of Columbia College will treat Chicagoans to an immersive two-week festival exploring ways in which concert dance presentation can transform from a “consumable” product to a meaningful documentation of the creative process. From March 29 through April 7 at the Dance Center (1306 S. Michigan Avenue in Downtown Chicago), Process v. Product will feature six innovative dance performances, buttressed by artist discussions and panels (along with commissioned blog posts from local artists) in an effort to dive deep into the process of dance-making and what it means to the final work audiences see onstage.

Guests of the festival—choreographers, dancers, presenters, students of dance and audiences—are expected to ponder and reflect on ideas surrounding just how and why the creation, practice and witness of dancing can move beyond consumption of a product by spectators into a realm where the choreographer already lives, inspiration—pulling back the curtain on the choreographic process.

​The idea for the festival sprang from former Dance Center Presenting Series director Bonnie Brooks, who saw its potential burgeoning in the idea of Molly Shanahan and Bebe Miller’s dovetailing performances scheduled at the venue on consecutive weekends this season. Inheriting the festival framework from her predecessor, current director Ellen Chenoweth then began the task of fleshing out the meat of the event’s programming with artist panel discussions and workshops that seek to guide the audience along this unique and revealing journey that these two luminary choreographers inspired. Says Chenoweth, “Molly and Bebe are some of the deepest thinkers in our field, and both share an extremely rigorous and thoughtful approach to process in relationship to performance.” Exploring that approach, says Chenoweth, is the objective the Dance Center hopes to achieve through Process v. Product, “through many lenses, both on the stage, on our blog, and in discussion,” all in an effort to shed some light on a creative process that Chenoweth admits is typically seen by most outside the dance community as amorphous.  She explains, “In general I think there’s a lack of understanding around how dance-makers make work,  what it means to start with the blank canvas of a studio with dancers. But even that idea is probably jumping ahead too far; some choreographers start with source material from nature or from their own bodies. So the festival includes artists with a wide variety of approaches to the problem of making original work. I hope that Chicago choreographers and other artists will find the festival useful in exploring process, and I hope that general audiences will come away with a greater understanding of what goes into making a dance.”

​The source material festival-goers will get an opportunity to explore from the two participating dance companies is rich and varied. From March 29 through 31, Shanahan’s Mad Shak dance ensemble will present the world premiere ensemble work Of Whales, Time, and Your Last Attempt to Reach Me. The timely piece grapples with emotional ambivalence in a world of perception-altering technology and digitally dependent relationships. Through intricately crafted movement, Mad Shak investigates and expresses the tension between the rigid materiality of what Shanahan calls, “the self,” as reflected by the devices and media surrounding our lives, and the body’s invisible fluidity in response to those very same influences. Shanahan explains that the work "iis set at the intersection of conflict, where constantly shifting input confirms identity in one moment and then throws it off-kilter the next.”

The choreography of the work harnesses the immediacy of input (in this case, digital) and explores just how that input can become re-affirming one minute and disorienting the next. Shanahan explains that in the work four dancers (of which she is one) wrestle with the revelation and then deconstruction of a variety of ways that “the body can be used to create a kind of armoring,” whether that is physical (muscular) or emotional, revealing that the way in which she arrives at set choreography become the individual mode in which a choreographer works in front of an audience, in effect choreography for sake of audience, inviting visual consumption, in a sense. And for Shanahan, it’s not the glories of human existence that dance reveals best, but the most personal,  vulnerable and even unseemly elements of our existence. She explains, “For me, dance is not about the glorification of the human body but about noticing and celebrating, without exploiting, the embodiments of human life that are discarded or deemed on the fringes.”

​For Shanahan, exploring these immutable elements of existence is primarily what makes dance-making a necessity, because dance is a language unto itself. And like other languages, there are concepts or words for which other languages have no literal translation. She notes, “One of the appeals of making dance is, for me, the deep specificity of the body and its ability to suggest meaning, but also to expand meaning well beyond verbal or conceptual definitions or indicators of meaning.”

In this respect, audiences of Process v. Product will get an intimate look into Shanahan’s own language or perhaps her “dialect” within the language of dance. After all, she sees well beyond dance itself as a packaged, objectified product, but simply a “phase in a creative process.” Concert dance, for her, simply documents that process with unique constraints that “make a particular piece that piece.” For Shanahan it’s the fluidity she embeds in those constraints that enable the artists and audience to live inside an environment that reinforces the knowledge that they are all constant participants in its individual and distinct creation each and every time.

Another featured work highlighted on the festival’s program will be Bebe Miller Company in In a Rhythm, a suite of new dance works based on the dynamics of adaptation and translation. Inspired by the writings of Gertrude Stein, Toni Morrison and David Foster Wallace, whose own voices capture diverse cultural relevancies through their structure of language. In a Rhythm looks at the syntax of movement—how we apprehend meaning through the juxtaposed dynamics of action and context in time and space.

​In the new work, Miller will employ a healthy dose of the inter-disciplinary programming for which she is so well known. And that is what helps to open the audience to the process of documenting the creative process from which the work sprang. She explained, “Choreography is in essence a documentation strategy. Along with our performance of In a Rhythm we’ll be offering a video installation, scrolls of text drawn from my choreographic notes, and a web-based Portal displayed on iPads that traces the chronology of The Making Room. Each of these parts progressed in good measure by heading off in a direction that left behind a trace. That look backward, seeing where we’d been, shaped the next instance of forward movement. My hope is that viewers will recognize something in the interplay of happenstance, epiphany and tedium that we all share when we work toward a moment that we don’t yet recognize but feel is worth the effort.”

Chenoweth was introduced to the work for the first time when it premiered last fall at the Wexner Center in Columbus and described how heavily process-oriented its message was. “(I) was struck by how welcoming and accessible (the work) is. You get a sense that the dancers are humans, humans doing extraordinary things, but gorgeously idiosyncratic individuals,” she told me. “And Bebe performs in the work and speaks openly about what she was thinking about while she was making it, what she was reading and watching. I’ve never made a dance before myself, but she makes the experience feel relatable and possibly achievable. It’s really fascinating to see the connections between her source material and the resulting dance unfurl before you on stage.”

​Miller’s generous use of non-dance elements, of course, is only the first step in her revelatory process. She brings the audience along her creative journey with an understanding that they want to be part of this reveal, expecting that those who witness her performance are indeed ready and available to learn what creative inspirations and exploration led to the final work onstage. She explains, “Whether multi-disciplinary performance deepens meaning for an audience, of course, will depend on the content and context of all that is offered and received. I’m interested in offering a holographic depth to that immediacy by sharing the means – the process involved – by which we’ve arrived at the moment in front of us, as part the moment itself. I expect a viewer to bring their particular frame of attention to bear on the situation between us. The meaning-making that arises, hopefully, takes place because we’re all attending to the possibility.”

​With performance as the jumping off point, Process v. Product will invite introspective exploration of the creative process through panel discussions and workshops that take the immediacy of the festival’s performances and examine the underlying creative channels that led to creative output.

Chenoweth explains that a series of discussions called Process Prism Panels will serve as an apt exploration of artistic processes through a variety of disciplinary lenses. Audiences will get insight into the creative process from a variety of artistic voices, all sharing their own distinct paths to the artistic developmental process. She explains, “I’m looking forward to having a visual artist, a choreographer, and a poet all share stories about how they approach creation. I think we often get too attached to disciplinary boundaries when artists themselves are often working in multidisciplinary ways. Molly is a choreographer but she’s also a breathtaking writer. I’m hoping she’ll talk about how her writing practice influences her dance-making, and vice versa, and I think that may show up in interesting ways in the stage work as well.”

​For the creators involved, the possibility of shedding a little light on how inspiration matures into the creation, yielding performance and “product” only deepens the experience for both themselves and the audiences that consume their work. As Miller puts it, audiences may actually see something of their own creative processes in what the festival reveals making dance creation a more relatable concept. She explains, “My hope is that viewers will recognize something in the interplay of happenstance, epiphany and tedium that we all share when we work toward a moment that we don’t yet recognize but feel is worth the effort.”