On August 20, 2016, Chicago Dancers United hosted more than 2,400 guests to celebrate the momentous 25th Anniversary of Dance for Life. The special evening began with an elegant gala at the Hilton Chicago and continued at the historic Auditorium Theatre where some of the most renowned Chicago dance companies performed on the same stage for one night only. Raising more than $425,000 in 2016— $100,000 of which went to the AIDS Foundation of Chicago—Dance for Life has raised a total of $6 million through its pioneering and empowering 25 years.

“Over the past 25 years, Dance for Life has touched an overwhelming amount of people both directly and indirectly, said Chicago Dancers United executive director Anthony Guerrero. “To see so many of those people, friends from near and far, come together to celebrate the impact that this event has made, was truly magical, and it was inspiring to see the individuals who helped carry on Dance for Life and will continue to do so.”

​The celebratory evening began at 5:00 p.m. at the Hilton Chicago (720 S. Michigan) with a beautiful gala reception welcoming old and new friends. Guests mingled with one another while enjoying food and cocktails before making their way over to the Auditorium Theatre of Roosevelt University (50 E. Congress Pkwy) for the highly anticipated performance. As the massive crowd took their seats, guests were treated to the debut of Audience Architects’ “Every Day is a Dance” video, melding comedy and dance to highlight the power of performance in everyday life. Giordano Dance Chicago, the only company to have performed in all 25 years of Dance for Life, took the stage first with Gus Giordano’s signature Sing, Sing, Sing and were followed by incredible performances from the Joffrey Ballet (Round of Angels—the first piece they ever performed at Dance for Life), Hubbard Street Dance Chicago (Solo Echo), Visceral Dance Chicago (VITAL—featuring live music by Peter Ferry) and Chicago Dance Crash (Heard That). Closing out the first act of the performance, Harrison McEldowney and Jeremy Plummer’s world premiere piece, Purple Medley, featuring music by Prince; and in true Dance for Life tradition, Randy Duncan’s world premiere of Depth of Light featuring dancers from the entire Chicago dance community capped off the celebratory evening. Hosts Carisa Barreca and Tim Mason from The Second City took the stage throughout the performance and helped pay tribute to long-time supporters of Dance for Life Fred Eychaner, Barbara Kipper and Scott Silberstein and Matt Hoffman with HMS Media.

In 1991, after having lost many close friends and dance colleagues to HIV and AIDS, Keith Elliott, a member of Joseph Holmes Chicago Dance Theatre (JHCDT), took it upon himself to rally his fellow dancers and take an active role in preventing the spread of the disease. Together with friend Todd Kiech, JHCDT associate artistic director Harriet Ross, HIV/AIDS community activist and skilled fundraiser Danny Kopelson and Hubbard Street Dance Chicago executive director Gail Kalver, the small group worked together to bring Chicago’s dance community together, for one night only – to raise money and…Dance for Life.

​Over the past 24 years, 32 Chicago-based, professional dance companies and numerous choreographers have been presented at Dance for Life, supporting and showcasing the city’s unique and diverse talent. Millions of dollars have been raised by the annual event  since its inception, for the AIDS Foundation of Chicago, The Dancers’ Fund and 30 AIDS service-providing organizations in Chicago. The event has supported and helped produce several spin-off events, while The Dancers’ Fund established by Dance for Life provides assistance to any member of the professional Chicago dance community facing critical health issues. In response to the changing needs of Chicago’s dance community, evolutions in the nature of HIV/AIDS, the growth of the annual event and its other programs, DFL has matured into a nonprofit organization, Chicago Dancers United, functioning on a year-round basis. 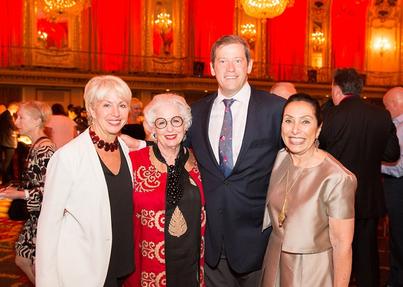