May 2, 2014—Ballet Preljocaj swept into Harris Theater of Music and Dance May 2-4 with its dark, sexy “Snow White.” From the very first scene it’s clear that no hint of Disney fluff will permeate Angelin Preljocaj’s interpretation of the classic Grimm tale, opening with a dimly lit stage where a dying, cloaked queen struggles to give birth to her daughter, Snow White. Modern, suggestive, and sometimes haunting, choreography, provocative Jean Paul Gultier costumes, and unforgettable special effects create a sense of both darkness and sensuality throughout the ballet.

Émilie Lalande bewitches as Snow White, always finding herself surrounded by men, whether the seven dwarves, the huntsmen or, of course, the prince (danced by Jean-Charles Jousni). This offers an array of partnering opportunities and lifts, although the mood of each interaction varies significantly. The most unforgettable duet is an unnerving, borderline necrophilous duet between Lalande and Jousni, when the anguished prince dances with the presumed-dead Snow White. Jousni hefts and tosses Lalande’s limp body, and even as she seems to relax completely, her landings are soft and lovely. In another disturbing scene, the queen drags Snow White around by the poisonous apple in her mouth, and even as she struggles, she manages to make the movement beautiful. Preljocaj truly pushes your comfort level at many points during the ballet.

The effects are truly stunning throughout, including aerial suspensions, the clever interpretation of the magic mirror, smart, minimal sets, and imaginative costuming. Like the queen’s revealing attire, Gaultier even created a suggestive dress for Snow White with a loose panel of material barely (and sometimes not) covering her backside. As for the lighting, its dimness helps create the eerie atmosphere of the tale, but sometimes obscured the dancing. For example, the seven dwarfs are marvelously entertaining as they perform impressive acrobatics while suspended from the coal mine set at which they are working, but their bodies sometimes blended into the sets, making their movements difficult to discern.

Preljocaj’s “Snow White” pushes the envelope with some of its racy scenes and the unsettling interactions between Snow White and the other characters. Yet, the company creates something truly haunting and visually incredible to witness. 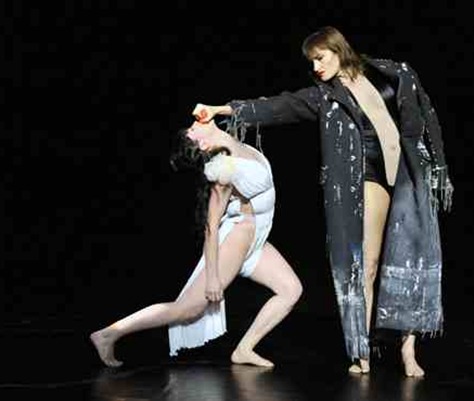