March 22, 2014—An ornate backdrop painted with brightly colored rugs and tapestries; vibrant costumes shimmering from curtain to curtain; larger-than-life personalities exploding onto the stage—this is the opening scene of the Houston Ballet’s production of “Aladdin” performed at Auditorium Theatre, March 22 and 23. The energy of this moment sets the performance in motion, first plunging into the bustle of the marketplace, then pitching downward into the cave of riches, and eventually elevating up and away on a magic carpet ride. “Aladdin” is a delight for children young and old with its unwavering attention to detail, special effect surprises, and stellar dancing.

Houston Ballet’s principal dancers carry “Aladdin.” Although the plot limits the amount of dancing performed by the Djinn (genie), Christopher Gray stuns in this magical role, literally floating into the ballet (with the help of some clever stage work), clad in blue body paint and parachute pants. As the production progresses, it becomes clear that it’s not just the special effects that make the Djinn so striking, but rather Gray’s dynamism. With his incredible leaps, Gray gains so much height that he seems to levitate all on his own. He also executes crisp beats and soft landings for each of his challenging spins.

Karina Gonzalez is a joy to watch as Princes Badr-al-Budur. Perhaps the most arresting visual image of the ballet is Aladdin’s “vision” of the princess during Act I, when Gonzalez’s beautiful arabesques are showcased against the “sun” in one of many moments of brilliant stage design by Dick Bird. Dressed in white throughout, Gonzalez seems like a delicate flower petal, wafting in a breeze, with effortless balances and penchées.

Connor Walsh communicates Aladdin’s naïve and even goofy personality with a campy portrayal of the character. Although the genie’s choreography threatens to outshine that of the other male roles, Walsh gets to execute some incredible turns, and his partnering with Gonzalez is memorable—particularly during a series of lifts in Act II.

David Bintley also choreographs an array of lovely mini-features as the jewels come to life in the cave of riches. Each set of jewels, from pearls to diamonds, enchants with its own unique flavor. The scene might remind you the “Nutcracker’s” Land of Sweets.

Designer Sue Blane’s costumes sparkle like the dancers themselves. The Mahgrib’s lavish robes and hat, elaborate lion costume, the gauzy sapphires’ gowns—no detail is left unattended, down to each jeweled accent, catching the stage lights at the slightest rustle.

Additionally, the scene changes were remarkably deft, each transformation unveiling one whimsical setting after another. Color-morphing icicles, a skeletal staircase used in the cave of riches, the flying carpet, and wing-flapping “birds” were some of my favorite elements. As a whole, the vibrant costumes and staging helped feed the energy of the production, even though I had difficulty reconciling the random Mandarin influences (costuming, lion dance, dragon) with the Arabian theme of the ballet.

Finally, but certainly not least, the Chicago Philharmonic Orchestra live accompaniment of the ballet with performances of Carl Davis’s score completed the lush sensory experience of “Aladdin.” 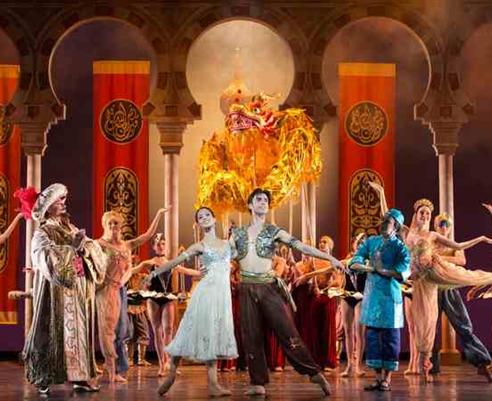