Following a successful 20th anniversary season, Deeply Rooted Dance Theater (DRDT) embarks upon its next 20 years with “Looking to the Future” February 24, 2018 at the North Shore Center for the Performing Arts in Skokie. DRDT promotions a mission to present world-class dance inspired by the African diaspora in a community “dedicated to nurturing artists, supporting human relationships and sharing common values through engaging in dance.”

The program features the world premiere of Alice by DRDT artistic team member Nicole Clarke-Springer. This solo focuses on the journeys women embark upon when making the choice to “swallow” various ideals. Inspired by “Alice’s Adventures in Wonderland” by Charles Lutwidge Dodgson (using the pseudonym Lewis Carroll), Alice explores the ways the things we ingest and digest in our lives dictate how large or small we become, thus varying the intensity of our journeys. Alice is set to the song “White Rabbit” (1967), written by Grace Slick and recorded by American psychedelic rock band Jefferson Airplane; poetry by Candace Spencer; and Nina Simone’s cover of the song “Lilac Wine” by James Shelton (1950).

Also on the program are works from the company’s repertoire. Femme (2016) celebrates the allure, courage, strength and beauty of women, choreographed by Clarke-Springer with music by Nina Simone. Desire (1994) portrays three types of attraction: first sight, physical beauty and young love, choreographed by DRDT co-founder and associate artistic director Gary Abbott to music by Hans Zimmer, Geoff McCormack and Simon Goldberg. Church of Nations explores the religious, spiritual and political implications of war and its devastating impact on humanity, created in 1991 by DRDT co-founder and artistic director Kevin Iega Jeff to music by Ennio Morricone and The Art Of Noise. Inspired by the music of Stevie Wonder (The Secret Life of Plants, Songs in the Key of Life, Innervisions and others), Jeff’s In a Child’s Eye tells the story of a little girl’s dream journey to a flower community, where she encounters a war between good and evil.

​Deeply Rooted Dance Theater’s “Looking to the Future” takes place Saturday, February 24 at 7:30 p.m. at the North Shore Center for the Performing Arts (9501 Skokie Boulevard in Skokie). Tickets are $25–45 and available at 847-673-6300 or northshorecenter.org/event/deeply-rooted-dance-theater/.All programming is subject to change. For information about DRDT, visit deeplyrooteddancetheater.org. 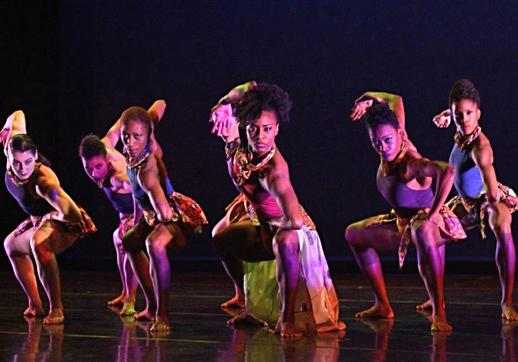