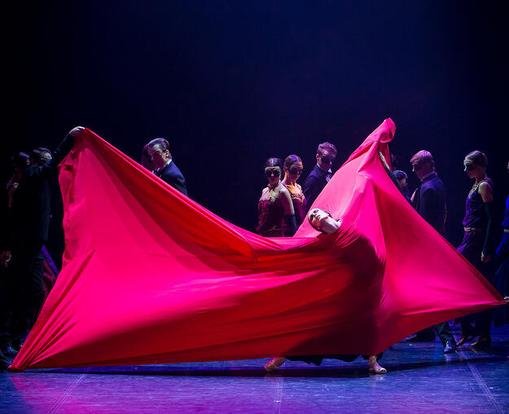 One of Russia’s premier ballet companies, Eifman Ballet of St. Petersburg, will make its return to the Auditorium Theatre May 19-21 for three performances of Boris Eifman’s extraordinary and engrossing work, Red Giselle, which had its Chicago debut at the Auditorium in 2000.

“We are so excited to bring Eifman Ballet of St. Petersburg back to Chicago to perform the captivating Red Giselle, Boris Eifman’s artistic interpretation of the famed ballerina Olga Spessivtseva’s story,” says Tania Castroverde Moskalenko, Auditorium Theatre CEO. “We are committed to bringing the best in international dance to Chicago and to our landmark stage, and Eifman Ballet is a reflection of that commitment.”

Red Giselle is inspired by the story of Olga Spessivtseva, a famous Russian ballerina who portrayed the titular character in the classic ballet Giselle many times. The story, which begins in revolutionary Petrograd, follows “the Ballerina” as she is introduced to the world of the Russian revolutionaries and caught between her art and the power of the Communists, who want to use artists as instruments for spreading their ideology. The Ballerina flees to Paris and reprises her role of Giselle in the famous story ballet while also dealing with unrequited love, mental illness, and ghosts from her past. Boris Eifman’s extraordinary, expressive choreography and inexhaustible imagination paired with opulent sets and costumes bring the tragic tale to life.

Of the work, The New York Times said, “(One) has to admire the impact of Mr. Eifman's choreography and the sheer originality of his theatrical vision.”

​Eifman Ballet of St. Petersburg was established in 1977 by Boris Eifman as a company that would serve as “a ballet theater for one choreographer” that combines the rich traditions of Russian theater with an original ballet repertoire. The company previously has performed Eifman’s original works Up & Down, Rodin, The Seagull, and Don Quixote, or Fantasies of a Madman, among others, at the Auditorium Theatre.Performances take place May 19 – 21 at the Auditorium Theatre.

Tickets start at $33, and are available online at AuditoriumTheatre.org, by phone at 312.341.2300, or in person at the Auditorium Theatre Box Office (50 E CongressParkway).