The red-hot, Grammy-winning, Chicago-based contemporary chamber music ensemble, eighth blackbird, is firmly at the forefront of reshaping classical music for a modern audience, and listeners the world over have taken notice.

Bold and innovative from the very start, eighth blackbird was formed in 1996 by six alumni of Oberlin Conservatory of Music in Ohio. The group’s origins, however, may be traced even further back to their undergraduate days when Tim Weiss, the director of Contemporary Music Ensembles at Oberlin, first set the students together in a chamber music group to study more difficult works within the burgeoning repertoire.  After winning a small local competition, they decided to stay together as an ensemble through graduate study and beyond. Four of the original six members are still with the group today. The ensemble consists of pianist Lisa Kaplan, percussionist Matthew Duvall, cellist Nicholas Photinos, clarinetist Michael J. Maccaferri, flutist Tim Munro, and violinist/violist Yvonne Lam (the latter two, newest members of the ensemble, joining in 2006 and 2011, respectively).

In 1998, two years after its founding, eighth blackbird became the first contemporary music group to win the Grand Prize at the Concert Artists Guild International Competition in New York City.  Since then, the ensemble has been honored with numerous industry awards, including three Grammy Awards—their latest in 2013 for the ensemble’s album, Meanwhile.

There is no shortage of critical acclaim for the group’s innovative work. The Los Angeles Times dubbed the sextet “super-musicians” for balancing wildly exigent performances with, at times, brassy, stylish choreography, creating a visceral connection with audiences other contemporary ensembles simply struggle to achieve. The New York Times described their performances as the “the picture of polish and precision,” and they continue to receive critical praise for an ever increasing, intensely virtuosic repertoire and the group’s innate ability to make that repertoire accessible to a growing contemporary audience—not an easy feat in the staid world of classical music. Add to that the challenge of performing new compositions from memory—and you’ve got a genuine phenom at the vanguard of the burgeoning contemporary classical music scene.

The name eighth blackbird was inspired by one of the stanzas from Wallace Stevens’ modernist poem, Thirteen Ways of Looking at a Blackbird.  The poem suggests a new approach to seeing what is commonplace, with the eighth stanza (the one from which the group derives its name) referring to “noble accents” and “lucid, inescapable rhythms,” descriptions that could be appropriately applied to the group's artistic approach.

eighth blackbird commissions, performs, and records a repertoire consisting almost entirely of works composed after 1980.  Many of their commissioned works come from today’s more illustrious classical composers, including Steve Reich, Jennifer Higdon, Stephen Hartke, and John Luther Adams. However, the group has also encouraged the development of lesser-known composers, beginning in 2011 with their first competition for new chamber music written expressly for their ensemble.

In explaining the ensemble’s focus on contemporary compositions, Tim Munro, eighth blackbird’s flutist, jokes that “We don’t play any works from the Classical ‘canon’ because we mostly play as an indivisible sextet, and Beethoven just didn’t write anything for our instrumentation!”  A fact indeed, but the real reason is that the ensemble members simply see themselves as new music specialists who “have the most to offer in the music of our time, music that speaks our contemporary language directly to a contemporary audience.”  They work with composers who have life experiences similar to their own (iPhones, modern pop music, movies), so these composers are “speaking a language that is more directly intelligible” to the ensemble as modern players.

Another aspect of the group that stands them apart from standard music chamber ensembles is that eighth blackbird also lends a very theatrical flair to its performances through engagement with a wide variety of artists, mediums and “instruments.” According to Munro, the group worked with theater directors, contemporary dance choreographers, puppet theater companies, and multimedia artists “to curate a whole ‘show’ experience” similar to what is done in popular music performances.  In addition to an innate virtuosic facility, the modern compositions within eighth blackbird’s repertoire often call for the use of more unusual performance devices. Munro explains that on stage the ensemble has “sung, spoken, danced, acted, pulled curtains, tapped on car parts, played duck-calls, sawed wood . . . and played our primary instruments.”

As a result, in the process of experimenting with new ways of presenting music, the genres within the ensemble’s repertoire have grown considerably.  As Munro explained, one night, they may “work on music by a young indie rock guitarist, the next by a modernist Frenchman, the next by an older minimalist legend.”  It all contributes to eighth blackbird’s goal, which is to “create an evening-length journey” for the audience that is “alternately thrilling, moving, confronting, whimsical, strange, and laugh-out-loud funny.”

Peter McDowell has been managing director of the group just since October of 2013, but he worked with the ensemble on several occasions in the early to mid-2000s through his position as program director for the Chicago Department of Cultural Affairs at the Chicago Cultural Center.  Looking back on the evolution of the ensemble over the past decade, McDowell points out that, although the ensemble “now supports a full-time nonprofit organization with a growing staff and expanding, exciting activities . . . its spirit and ethos remain the same: one of the things I liked about them was (and still is) their easygoing nature and their interest in making music that is beautiful, interesting, and forward-thinking; and their ability to jump it at various points along the spectrum of what we consider ‘new music,’ from serious to poppy to playful to unfathomably complex.”

Although eighth blackbird now performs throughout the world and has three academic residencies in this country, it is still very much a part of Chicago’s classical music landscape.  One of those residencies happens to be with the University of Chicago. There, they perform in Contempo concerts (the university’s contemporary music series that showcases today’s most innovative composers), work with graduate composers on their pieces (culminating in two concerts each spring) and conduct master classes, offer coaching, and give lessons as their schedule allows.  The ensemble’s most recent Contempo concert took place on February 4 at the Logan Center for the Arts on the University of Chicago campus.  Chicagoans will have yet another opportunity to see eighth blackbird at work when the group performs its program, Still in Motion, at the Museum of Contemporary Art’s MCA Stage series on March 8th and 9th. The program (which will include three world premieres) is comprised of a range of compositions, including a transcription of Études by György Ligeti; a nationally-acclaimed commission by Steve Mackey; and a piece by Richard Reed Parry of Arcade Fire. Still In Motion at MCA Stage will be followed by a discussion with the artists the first night and a benefit the second night.

Never static in its artistic approach, eighth blackbird is continually seeking new ways to grow.  One long-term vision the group has developed is the creation of a summer "young artists" festival, one that emphasizes learning by doing, in which ensemble members would rehearse and perform alongside the students, thus enabling them to learn from established, successful musicians.  In their work with young musicians, Munro points out that eighth blackbird is there  to provoke them “to take more responsibility for themselves and their play, to develop and put into practice their own musical ideas, to think in a more entrepreneurial way about their careers, to begin to consider the future for themselves and for classical music.”

eighth blackbird’s music is not intended to replace traditional classical programming, of course, but to augment the landscape of the field.  Munro explains that “there are so many amazing groups playing concerts of Brahms, Haydn, and Bartok,” and rather than join an already crowded field, eighth blackbird seeks to bring a contemporary face of classical music to a contemporary audience of all backgrounds and ages.  As a result, eighth blackbird is broadening and expanding the traditional experience with its cutting-edge focus that helps to redefine what classical music means for the modern listener. 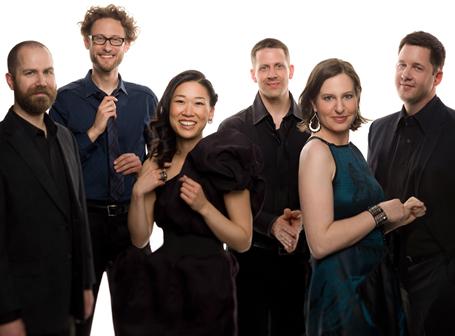