Elgin Community College (ECC) Arts Center has added a Mother’s Day weekend  engagement of the stage hit Under the Streetlampto their 2014-2015 season. Exuding the rapport of a modern-day Rat Pack, the Streetlamp quartet delivers an electrifying evening of doo-wop, Motown, and rock ‘n’ roll, including favorites from The Drifters, The Beach Boys, The Beatles and a show-stopping salute to the Four Seasons.

Under the Streetlamp blends the diverse talents of Michael Cunio, Michael Ingersoll, Christopher Kale Jones and Shonn Wiley—all recent leading cast members of the Tony Award-winning musical Jersey Boys. Together the group has filmed two PBS Specials, recorded three albums, performed to packed houses throughout the U.S., and appeared as musical guests on TV’s Access Hollywood and Extra. The four first met while performing in Jersey Boys, during which time they also performed on The Oprah Winfrey Show and The Tonight Show with Jay Leno.

“We’re so excited to have the guys back,“ says Steve Duchrow, ECC Arts Center director of performing arts. “We were one of the first venues to book ‘Streetlamp’ and it’s been a joy to see the hard-earned, well-deserved success that has come their way. Our audiences feel like this is a homecoming—we’re welcoming back old friends.”

Performances will take place Saturday, May 9 at 7 p.m. and Sunday, May 10 at 3 p.m. at the ECC Arts Center, located at ECC’s Spartan Drive Campus, 1700 Spartan Drive, Elgin. For performance and dinner tickets or more information, visit tickets.elgin.edu or call 847-622-0300.

Under the Streetlamp Returning to ECC Arts Center 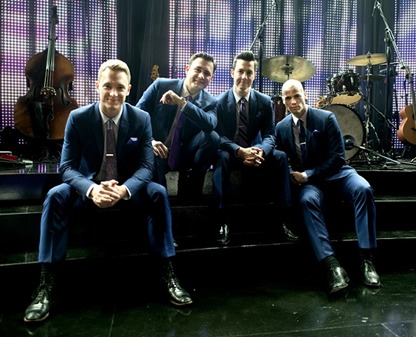