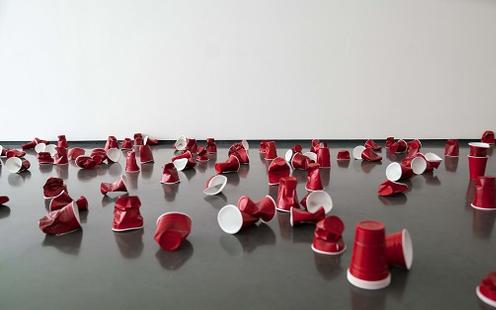 The Elmhurst Art Museum (EAM) has announced In This House, a group exhibition featuring new sculpture and a site-specific curtain by acclaimed artist, writer and curator Michelle Grabner. The show will also include collaborative works by Grabner and Brad Killam, and works by Paula Crown, Tony Tasset, and James Welling.

​“Regular exhibitions within the McCormick House grant new, ongoing interpretations of the home built by one of the 20th Century’s greatest architects. We are excited to host a new group exhibition featuring Michelle Grabner, who has made a wide variety of works about the domestic throughout her career. Additionally, she and her husband Brad Killam used their own suburban home as a platform for avant-garde art,” said John McKinnon, executive director.

The show’s title stems from an advertisement for prefabricated housing designed by Mies, for which the McCormick House was a prototype. The 1955 brochure states “In this house, architecture and technology have combined to contribute a new dimension.” The works in the exhibition expand on this intersection and celebrate the formal languages that inhabit domestic structures. Materiality, repetition, color and spatial order will be featured and minimally distributed throughout the volumes of the McCormick House living space.

Michelle Grabner will contribute a series of cast iron forms designed by the Kohler Company. These reductive plumbing fixtures are heavily coated in black oil pigment stick to emphasize their abstract properties over their functional attributes. Grabner will also contribute a selection of cast brass and iron textiles and household articles that function through repetition.

Michelle Grabner and Brad Killam will create new mobiles for the museum’s main space. The large piece will feature a painted canvas with garbage can lids attached to it. Together, they will also exhibit a video from the 1990s where Grabner and Killam passed their son Oliver back and forth to each other.

Finally, James Welling’s photographs of the Farnsworth House in Plano, IL study how glass and light breakdown the spatial volumes of architecture and introduce the ontologically different order: The physics of the color spectrum.

Sponsored by Raymond J. and Sally J. Allen, the exhibition will be presented in Mies van der Rohe’s McCormick House Jan. 20-March 18, 2018. For more information, visit elmhurstartmuseum.org, A public artist talk with Grabner will be held on opening day, Jan. 20 at 1:30 p.m.