A view of the pit where the first emperor of China Qin Shihuangdi’s terracotta army was discovered in 1974 when a local farmer began digging what he had intended to be a well (photo courtesy of the Field Museum). 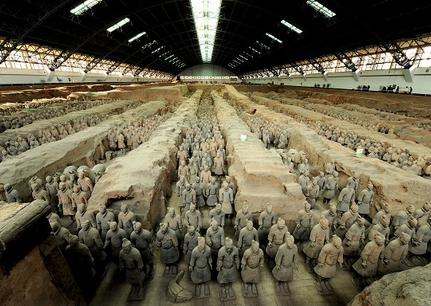 Imagine that centuries from now, someone excavating a construction site where you once lived accidentally uncovered many of your most prized possessions, things that have had the most meaning for you. What could they tell about who you were? Your hopes? Your dreams and fears? How much could those items really convey?

The concept is put into practice in The Field Museum’s newest exhibition on view this spring, China’s First Emperor and His Terracotta Warriors. Featuring more than 170 objects including stunning bronze artifacts, weaponry and ten of the of titular terracotta figures, Terracotta Warriors will introduce visitors to Qin Shihuangdi (chin she-wong-dee)—China’s First Emperor—an extraordinary ruler who united a country and built an army meant to last an eternity.

Arguably one of greatest archeological finds of the 20th century, Qin Shihuangdi’s terracotta army was a testament to the emperor’s steadfast vision of an eternal reign, mirroring the dominant rule he maintained in unifying China during his rise to power in 221 BC. That rule ended an era known as the “Warring States” period, during which China was composed of seven competing states and was marked by constant instability and broken alliances.

Qin Shihuangdi gained his dominance employing an organized military, superior weapon technology and a strong cavalry to defeat his enemies and establish that unified state.

The new exhibition owes its massive treasure trove of artifacts to a farmer’s dig in 1974 that just happened upon a massive burial complex Qin Shihuangdi prepared for his presumed rule in the afterlife. Although the tomb itself was known historically and was even visible on the landscape, the vast burial complex surrounding the site had yet to be discovered until that time. Archaeologists quickly began work excavating the site—a process that continues even to this day, just a hint of how massive an archaeological dig the complex comprises. Hundreds of pits, covering an area of nearly 22 square miles, have been located thus far, and it is estimated that more than 8,000 figures were buried there.

So exactly what did archaeologists learn from Qin Shihuangdi’s most prized possessions? Well, the site was meant to provide the emperor with all the necessary accoutrement to meet his every desire for eternity, so what we learn most is what mattered most to him. As Deborah Bekken, Director of Government Affairs and Sponsored Programs at the Field Museum told me, that went well beyond maintaining military strength. “The site contains not only the famous army of warriors to protect the Emperor in the afterlife, but also other pits containing artifacts for entertainment (such as the pit of the acrobats and strongmen), for enjoyment (such as the pit of the bronze birds and musicians), for administrative tasks and supplies (such as the pit of the horse skeletons and civil officials), as well as items that are still under debate…The tomb complex (was conceived as) a complete world to supply the First Emperor with everything he would need in the afterlife.”

Of course, weaponry was indeed high on that list of things. Among the weaponry used by Qin military forces, guests of the exhibition will discover crossbow bolts and a reconstructed wooden crossbow, the weapon that revolutionized warfare, allowing archers to shoot nearly 900 yards, with less skill and strength than was needed for a bow and arrow. Qin Shihuangdi was actually responsible for a range of advancements that went well beyond weapon technology during his relatively short rule. In fact, he enacted several important innovations that left a lasting impression on China. Many of these are still evident today. He worked to strengthen his newly founded empire by building a great wall (the pre-cursor to China’s “Great Wall”) to protect his land in the north and west. In an effort to increase trade, he constructed new roads and canals and even regulated cart axles so that wheels uniformly fit the newly constructed roads.

In order to rule effectively, a single currency, a standard form of writing, and a standardized system of weights and measures were all put into place. Examples of these innovations are all on display within the exhibition, including several Qin banliang (ban-lee-ang) coins—round coins each with a square hole—as well as a mold used to mass-produce these coins. This coin type became the standard form of Chinese currency for the next 2,000 years.

Other parts of the exhibition point to the remarkable level of craftsmanship early metal smiths demonstrated in some of the bronze artifacts found at the site. Even evidence of mass production techniques are shown with pieces like the terracotta warriors developed in sections clearly fitted together from modules during their construction and firing.

Selecting from such a vast variety and number of priceless artifacts was certainly a challenge for museum curators. Bekken indicated that determining what made the cut really boiled down to the larger story that they wanted to tell. The exhibition is designed to present not just the warriors established at the site to guard Qin Shihuangdi’s rule for eternity but to also reveal the broader picture of life at the time of his rule. “In addition (to the terracotta warriors), we (wanted) to include materials that illustrate the historical situation in China at the time of the First Emperor in an effort to put the site into clear context for visitors.  It is always a balancing act of trying to select the best artifacts to tell a complicated story, keeping in mind that certain items are no longer allowed to even travel or perhaps are currently on loan to other museums.”

As part of the effort to further excavate the massive site from which this treasure trove of artifacts has come, there are an array of remote sensing technologies that are currently being used to determine just what structures might lay underneath the main tomb mound. That mound has not yet been excavated, but scientists are learning more about it every day. Scientists are also undertaking further research on better conservation techniques for uncovering some of the very fragile components of artifacts still yet unearthed there.

The fascinating pieces found in this new exhibition not only articulate the importance that self-preservation held for China’s first emperor, but also the self-concept he maintained as a ruler that could surpass even time.  The vast advancements he made for his early monarchy set Qin Shihuangdi as a vanguard for future generations to come. This was a visionary ruler who understood full well what place he could hold in history. He stored away the evidence thereof in a massive cavernous site, went quietly to his resting place, and waited there for his dominance to continue, or perhaps for the world to find him one day in 1974 when a farmer set out to dig a simple well and discovered an ancient army fortified for eternity to defend, if nothing else, an emperor’s legacy for centuries to come.

China’s First Emperor and His Terracotta Warriors opens March 4 and runs through January 8, 2017 at the Field Museum.

Built to Last
Terracotta Warriors, a new exhibit at the Field Museum this spring, will explore the mindset of China's first ruler through the items he left behind to serve him for eternity.