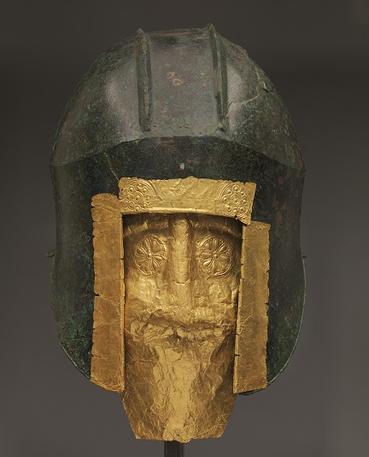 For  thousands of years the Greeks have cast a wide influence over the shaping of the modern world. Ripples of the culture’s impact on life as we know it today are still quite evident. The fingerprints of the ancient Greeks can be found in our language, our art, our literature, our theater, our philosophies, our architecture and, of course, our political system.

A rich sampling of that cultural and historical impact will be the focus of The Field Museum’s coming exhibition, The Greeks—Agamemnon to Alexander the Great, set to open November 25. The exhibit draws upon the collections of 21 museums throughout Greece to showcase more than 500 artifacts spanning 5,000 years of Greek history and culture. Museum attendees will begin their immersion into ancient Greece in the Neolithic period, beginning in about 6,000 BCE, and follow the ascension of the Greek culture to the death of Alexander the Great in 323 BCE. Many of the artifacts showcased in the new exhibit will be on display outside of Greece for the first time in their history.

“The material in this exhibition is truly exquisite,” Susan Neill, a project manager for the exhibit told me. “Unless you have time to go to Greece and visit all these museums, you’d never see such excellent examples of Greek culture.”

Among the artifacts on view in the exhibit are enigmatic stone figurines from the Cycladic Islands, gold funerary masks from Bronze Age tombs, classical marble statues of Greek poets, athletes, and heroes and brightly painted ceramic vases featuring scenes from Greek mythology and daily life.

But The Greeks—Agamemnon to Alexander the Great goes well beyond perfunctory  display of art from an ancient culture. It not only tells a compelling story of an ancient people, but lays the pathway for the development of the Western world.

Visitors will get an up-close-and-personal view of Homer, the man widely considered the father of literature in Western civilization. Homer authored two of ancient Greece’s best known tales, the epic poems, The Iliad, (which chronicled the war between the Greeks and Trojans) and The Odyssey (which details Odysseus’ long voyage home from the Trojan War). They will be able to follow the adventures of the mythic Agamemnon, the king of Mycenae, as he leads the united Greek forces against the Trojans. Additionally visitors will get a deeper understanding of the pearl of ancient Athens, Pericles. Widely considered to be one of the greatest statesmen the city of Athens ever produced, Pericles turned an association of Greek city states (known as the Delian League) into an empire with Athens at the center.

As first citizen, Pericles promoted arts and literature, turning Athens into a veritable hub of Greek culture. He also led the Athenians during the first two years of the Peloponnesian War, the conflict between Athens and her allies and Sparta.

But more than an exploration of the prominent names of Greek mythos, the exhibition will also provide a glimpse into the lives of everyday citizens of ancient Greece. The exhibit showcases artifacts unearthed in the burial tomb of a noblewoman known as the Lady of Archontiko, including pins, necklaces and a headdress made of gold.

There are military helmets excavated from tombs in Pella, revealing the high societal status of those buried there, and perhaps affording them a fierce reputation in the afterlife, Neill said.

“Clearly it was important to be represented well at your burial,” she explained.

However, objects buried with the dead also provide insights into their lives and the roles they played within their respective families and societies.

The exhibit displays a bust of a Greek citizen soldier, called a hoplite, who is thought to represent Leonidas, the king of Sparta and leader of the famed 300 against the Persians at the Battle of Thermopylae. While Leonidas has recently been depicted in several Hollywood adaptations that are not very historically accurate, Neill pointed out that historians welcome the interest pop culture provides in historical record.

The exhibit closes out with two of the most powerful military figures of the classical era, Philip II of Macedon and his well-known son, Alexander the Great. As Neill explained, these two who shaped not only the Greek world, but also most of the known world at the time, were most fitting figures to close the exhibition. A gorgon medallion from Philip’s armor, along with a diadem and spear will also be on view. “You can really see history unfold before your eyes when you look at these items,” Neill said.

There are also several sculptures of Alexander, including one depicting him as the Greek god, Pan.

“One of the overall arcs of the exhibit is how the Greeks related to the gods, and here we see one who was believed to have become a god.” Neill said.

The Greeks—Agamemnon to Alexander the Great does a wonderful job of pulling back the curtain on one of the most pervasive and influential ancient civilizations, but more than that, it brings our understanding of our own society full circle.

To expand your understanding of the impact of the ancient Greeks, after taking in the splendors of The Field Museum’s newest exhibition, head over to the National Hellenic Museum of Chicago for exhibitions designed to complement the new show. The National Hellenic Museum partnered with the Field to bring the wonders of  The Greeks—Agamemnon to Alexander the Great to Chicago.