February 8, 2014 - When a social worker is faced with less-than-satisfactory options to solve a routine abused or neglected child intervention case, should that under-appreciated public service professional go contrary to the rules and do something unethical in order to accomplish a suitable outcome? That is the question posed by the Goodman Theatre’s top-notch production of artistic associate Rebecca Gilman’s world premiere play, Luna Gale.

Luna Gale is an infant whom the audience never sees, but the little girl is still a strong presence throughout the story of Caroline (Mary Beth Fisher), a social worker who must take the child away from her drug-addicted teen parents, Karlie and Peter (Reyna de Courcy and Colin Sphar) and place her in either a foster home or a “kinship” residence (i.e., a relative’s household). Karlie’s mother, Cindy (Jordan Baker), is the obvious choice, and that’s where baby Luna is temporarily sent while Karlie and Peter clean themselves up, go to counseling, and work toward the inevitable court date when perhaps they might get their daughter back.

However, Caroline soon decides that Cindy is a “crazy Christian” strongly influenced by her take-control pastor, Jay (Richard Thieriot). When Cindy begins the process of officially terminating her daughter’s and Peter’s parental rights and adopting Luna, Caroline decides to concoct a scheme to thwart the woman.

Gilman's play tackles a number of hot button issues—drug addiction, religion, office politics, child abuse and molestation, and guilt—and does it with a frankness and realism that's sometimes painful. It’s a lot to throw into the mix, and Gilman manages to balance the various ingredients well enough to create perhaps not a great play, but certainly a good one.

It is the production that lifts what might have been a Lifetime Television movie-of-the-week to extraordinary heights. Directed by Robert Falls, Goodman's adroit artistic director (in his fourth collaboration with Gilman), the play’s staging and acting is simply outstanding. Fisher holds it all together with a strong, no-prisoners-taken performance that, in the end, reveals the vulnerability and tragic soul inside her character that's at first hidden to the audience. Luna Gale makes it clear why Mary Beth Fisher is considered one of Chicago’s acting treasures. The kids—de Courcy and Sphar—are also winning as meth-addicted youths portrayed in various stages of drug influence, withdrawal, and recovery.

But perhaps the real star of the production is Todd Rosenthal’s magnificently-detailed set design, built on a rotating platform to display several real-world locations—a hospital waiting room, the social worker’s office, a modest kitchen, a courthouse break room and more. Even the ceiling consists of those familiar office tiles and fluorescent lighting panels. The bulletin boards, bookshelves, wall decorations, signage, and actual soda vending machines are so spot-on that the audience feels as if they are peering through a real observation window into a government building where drama, heartbreak, tragedy, and ultimately love, all take place. 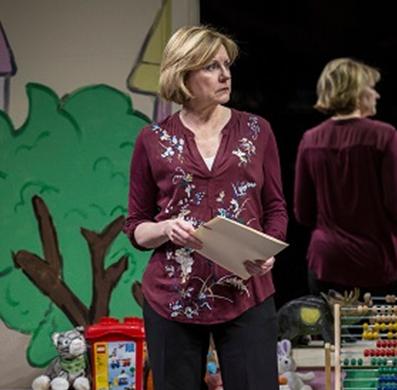