Cast of King of the Yees by Lauren Yee, a play which received its launch at Goodman Theatre's New Stages Festival (photo courtesy of Goodman Theatre). 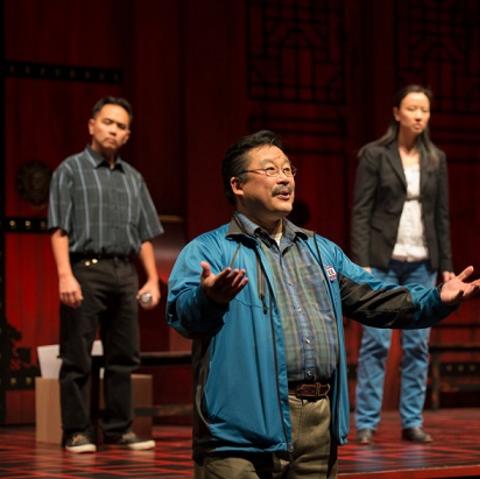 Goodman Theatre has announced the lineup of its 14 th annual New Stages Festival—a celebration and discovery of new work by some of the country’s finest established and emerging playwrights. Over the course of three weeks, the annual festival offers Chicago theatergoers a first look at eight new works, completely free-of-charge. The festival features three developmental productions (fully staged and performed in repertory), including: Lottery Day by Ike Holter, a new work that weaves together characters from Holter’s acclaimed previous plays Exit Strategy, Sender and more; Continuity by Bess Wohl, a comic look at a female director’s attempts to bring climate change to the forefront of a Hollywood blockbuster; and Twilight Bowl by Rebecca Gilman, a tender look at two young women facing very different futures.

Four staged readings appear during the final weekend of the festival (“Professionals Weekend”), including: Eden Prairie, 1971 by Mat Smart, the story of a young draft dodger returning home; How to Catch Creation by Christina Anderson, an ode to the art of creating; The Untranslatable Secrets of Nikki Corona by José Rivera, a supernatural tale of a woman’s attempt to communicate with her deceased twin; and We’re Only Alive for a Short Amount of Time by David Cale, a musical reflection of the playwright’s childhood. Plus a sneak peek at an immersive work-in-progress—POSTNATION conceived by Mikhael Tara Garver, an exploration of immigrants’ roles in the creation of the U.S. Postal Service.

“Each year the New Stages Festival offers us the opportunity to work with some of the most inventive and insightful storytellers working in the theater today. I’m thrilled to share this exciting lineup of new plays with Chicago audiences,” said Tanya Palmer, director of New Play Development. “From a backyard in Chicago to a small town bowling alley in rural Wisconsin to a windswept movie set in the New Mexico desert, this year’s plays invite us into the lives of characters struggling to make change–large and small–that will make a lasting impact on a world desperately in need of transformation.”

Since New Stages’ 2004 inception, more than 70 plays have been produced as a developmental production or staged reading. Nearly half of these plays were authored by playwrights of color and/or authored by female playwrights. More than one-third of all plays developed in New Stages have received a world premiere production at the Goodman or another leading U.S. theater. The Goodman’s upcoming season features the world premiere of Ellen Fairey’s Support Group for Men, which originated in New Stages in 2016. The Goodman’s 2016/2017 Season also featured acclaimed works that began at the festival: The Magic Play by Andrew Hinderaker, King of the Yees by Lauren Yee and Objects in the Mirror by Charles Smith.