Stacy Keach in the role of Ernest Hemingway in the Goodman Theatre production of Pamplona, a one man show scheduled this summer. The shows run was canceled after it was discovered that Mr. Keach had suffered a mild heart attack during opening night (photo by Liz Lauren). 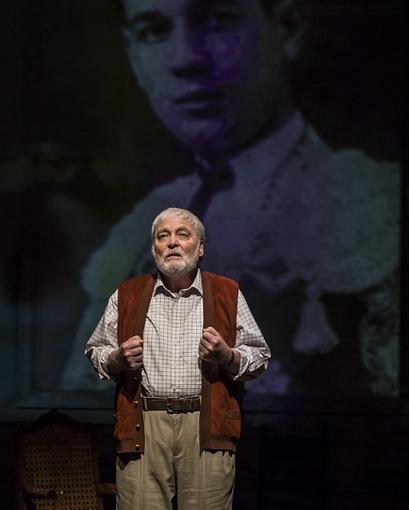 ​​After a week of medical observation, Goodman Theatre has confirmed that stage and screen star Stacy Keach experienced a mild heart attack during the May 30 opening night performance of Pamplona, a one-man show by Jim McGrath. After it became clear that Keach was struggling, the performance was halted midway by The Goodman’s artistic director Robert Falls. According to doctors, Keach is expected to make a complete recovery following a period of cardiac rehabilitation and rest. As previously announced, all remaining performances of Pamplona have been canceled; however, plans to reschedule the production are underway.

“On behalf of Stacy Keach, his family and the Goodman, we would like to extend our gratitude for all of the generous support and concern shown to Stacy this past week. I remain awed by Stacy’s courage and strength after experiencing such a disturbing event; his spirits are high and he is resting and recovering comfortably. Jim, Stacy and I look forward to continuing our collaboration on Pamplona,” said Falls.

McGrath’s 80-minute, world premiere production starring Keach as the iconic American author, Ernest Hemingway, was scheduled to run May 19 through June 25 in the Goodman’s 350-seat Owen Theatre. Keach, who has no understudy given the unique nature of the play and his extensive involvement in the project’s development, completed every preview performance from May 19-28. The May 30 opening night was halted mid-performance, and the following three performances were cancelled as Keach underwent medical testing.

Ticket holders will be offered a full refund to Pamplona, or tickets to the upcoming Ah, Wilderness! by Eugene O’Neill, directed by Steve Scott. A Goodman Theatre Ticket Services representative is expected to reach out to ticket holders, or patrons may call 312.443.3800 or visit the box office in-person at 170 N. Dearborn to resolve tickets inquiries.

​In a statement, The Goodman expressed gratitude for its Pamplona sponsors, including The Elizabeth F. Cheney Foundation (Major Support) and Hinshaw & Culbertson LLP (Contributing Sponsor) with additional support from the Director’s Society.