“I’m thrilled to reunite with Stacy Keach and Jim McGrath for what I know will be a triumphant return to this beautifully rendered work about one of our most charismatic yet complicated literary titans, and a Chicagoland native, Ernest Hemingway,” said Falls.

"I’m deeply grateful to Robert Falls, Goodman Theatre, and the good people of Chicago for encouraging me and allowing me to ‘get back on the horse,’” said Stacy Keach. “I’m so excited to be returning to Pamplona and the great city.”

In Pamplona, after the prize comes the pressure. Basking in the glory of career-defining awards, the 1953 Pulitzer Prize and the coveted Nobel Prize for Literature in 1954, legendary writer Ernest Hemingway insists his best work is yet to come. Five years later, holed up in a Spanish hotel with a looming deadline, he struggles to knock out a story about the rivalrous matadors of Pamplona. But his real battles lie outside the bullfighting arena; in declining health, consumed by his troubled fourth marriage and tormented by the specter of past glories, Hemingway grapples with the fight to conquer the deepening despair that threatens to engulf him.

Pamplona appears July 10 - August 19 in Goodman Theatre’s Owen Theatre. Ticket holders for the previously scheduled run of Pamplona and Goodman Members will have the opportunity to purchase priority tickets on February 16; general on sale is February 23 at GoodmanTheatre.org/Pamplona and at 12 Noon by telephone, 312.443.3800, or in person at the Goodman Box Office (170 N. Dearborn). 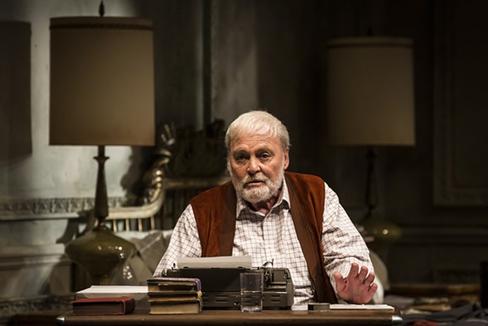 Actor Stacy Keach in the role of Ernest Hemingway in his own production of Pamplona at Goodman Theatre (photo by Liz Lauren).