Just as the Scottish village at the heart of Brigadoon appears only once every 100 years, the musical itself has spent the better part of the last three decades out of the spotlight. Appearing on smaller stages from time to time, it's been nearly 35 years since a major revival of this Lerner and Loewe masterpiece has graced the live stage.

That's all about to change this summer with the Goodman Theatre's opulent new production. This iteration of Brigadoon is not merely the first major revival of the classic musical in nearly 35 years—it features a freshly updated book that maintains the lush romance of the original while staying grounded in a more realistic world rich in Scottish culture and history.

“As a contemporary audience, we're ready to look at (Brigadoon) in a slightly new way,” says acclaimed Chicago director and choreographer Rachel Rockwell, who will lead the Goodman production. “I wanted to inject a healthy amount of real culture into this piece. Grounding it a little bit automatically takes away some of the inherent preciousness...and allows you to dig into the stakes that are already on the page.”

Those changes are happening at the behest of Liza Lerner, daughter of librettist Alan Jay Lerner, who first reached out to Rockwell about giving the musical an update and bringing the classic tale of love, loss and legend into the 21st Century. Rockwell has a storied history of injecting new life into beloved musical theater classics with award winning productions of legendary theater staples like Ragtime, Miss Saigon, Oliver, The Sound of Music and a long list of live stage landmark under her belt. “What was appealing to (Lisa Lerner) about what I had done,” says Rockwell, “was taking classics that existed and, without changing a word of them, making them feel very different to people.”

That difference is sure to be felt by Jennie Sophia, who will be playing Fiona, the female lead, in her third production of Brigadoon. Though the character is familiar, Sophia is excited by the new challenges this revival presents. After meeting with Rockwell to read some of the rewritten script and discuss the production for the first time, Sophia explains, “I literally was drooling just listening to her talk. Her ideas are absolutely beautiful and heartfelt. I think she's going to breathe a life into this piece...People are going to be left so full.”

Adding to that fullness will be Sophia’s rich history with the character. “I was born to play her,” she says. “The previous productions I was in helped me build a solid foundation for what this piece is about and who Fiona is.”

The actress’ background as a Midwesterner has also helped her understand the soul of Brigadoon. Though Sophia has had a great amount of success, she's very much grounded in her own roots. Growing up in the little town of Goshen, Indiana, she learned the importance of community and of being involved in other people's lives. That has informed her work on stage. After all, Brigadoon is, as much as anything, the story of a very unique little community. And just as Sophia enjoyed weddings, picnics, and small town celebrations growing up, the characters who inhabit Brigadoon want to love, celebrate, and care for one another.

Kevin Early, Brigadoon's leading man, is a veteran of musical theater (and of the Midwest) as well. Early got his professional start at the ripe old age of 10 in The Sound of Music at Rosemont's Marriott Theatre. Like Sophia, Early has had plenty of opportunities to enjoy the camaraderie of the Midwest and of the Chicago theater community. He's performed in a long list of classic musicals at area venues including Drury Lane South, Oakbrook, and Apple Tree. Early's experience extends to Broadway, with several turns in shows on the Great White Way like Thoroughly Modern Millie, A Tale of Two Cities and Les Misérables. His role in Brigadoon will mark Early's debut at the Goodman.

With all of her success on the Chicago stage, Rockwell, too, is making her Goodman debut—and with a pretty big challenge ahead. Reimagining a Lerner and Loewe musical is not exactly something that happens very often. The right librettist, designers, and stage actors willing to go on the journey are all vital to the production's success. Fortunately, a fantastic team of collaborators is on board for the Goodman revival. Complimenting Rockwell’s talents, the production team includes Mara Blumenfeld returning to the Goodman to design costumes following her stunningly work on The White Snake, Jeff Award-winning Roberta Duchak music directing, and Brian Hill writing the new book.

And a substantial production it will be. Twenty-eight actors will grace the stage in Brigadoon. Though considered a large cast—a HUGE cast—by some standards, Rockwell prefers to have plenty of actors to flesh out a story. “I never do any small shows,” she says. “The only thing that isn't in it are kids and dogs.”

Those 28 actors aren't merely set dressing, however. Each of them was cast to help serve the story. So much so that Rockwell spent four hours discussing stage business and  props required for one of the large crowd scenes because she wants each and every one of the characters to contribute to the story at every moment they're on stage. Although every audience member won't notice every tiny detail, Rockwell hopes to create “an interesting comment on human nature wherever you look.”

With Rockwell's guidance and attention to detail (and passionate performances from the romantic leads), this  updated Brigadoon is likely to bring a lot of beauty and light to the stage as the Goodman wraps up a stellar 2013-2014 season. In addition to Hill and Rockwell's collaboration for changes in the book, Rockwell is also weaving a great deal of Scottish culture and dance into the production. “The culture is so rich in tradition, and it's so rich in dance,” she explains. She'll be infusing that culture into this revival with that authentic Chicago theater aesthetic that she's honed in her many stage productions here. And that’s one thing that will make Brigadoon so endearing to Chicago audiences this summer.

Says Rockwell, “Almost everybody that I ever mention Brigadoon to says, 'Oh, I love Brigadoon.'”

Although classic Broadway musicals are often criticized for being old-fashioned or out of touch, it's hard not to get excited about this production. Yes, the show has been around for over 65 years. Sure, there is bound to be a heaping helping of very traditional musical theater romance. However, it's impossible to resist the incredible score (including the memorable “Almost Like Being in Love,” “The Heather on the Hill,” “Waitin’ For My Dearie,” and “There But For You Go I”). And just as Brigadoon's lovers wrap themselves in the possibility of a life together, theater-goers are sure to be intrigued by the chance at a new life for this old classic.

“If anybody is just looking for an evening to get away and to see and experience beauty and love and passion,” insists Sophia, “come on out and spend an evening with us. We're excited to tell the story and I'm looking forward to sharing it with the world.”

Explains Rockwell, “Our goal all along...in the reimagining of this piece was never to take Brigadoon to the point where you went, 'What just happened?' We want people who know Brigadoon to walk in and go, '”Oh, I knew I loved Brigadoon.'”

So, why not take a trip to the Scottish countryside this summer? Just make sure you get your tickets before Brigadoon vanishes back into the mist all over again. 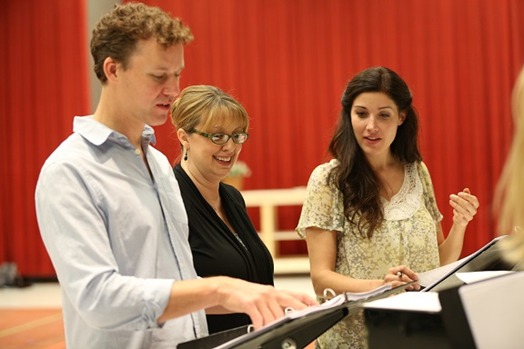