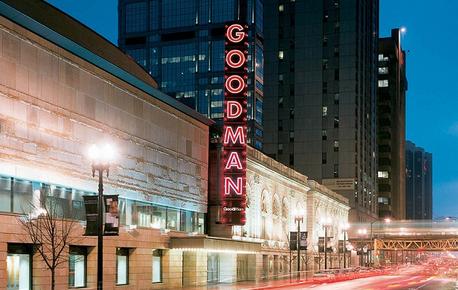 Goodman Theatre artistic director Robert Falls and executive director Roche Schulfer have announced that Goodman Theatre will expand its education programming into elementary schools with a $100,000 grant from Disney to bring the “Disney Musicals in Schools” program to the Chicago area. The program is a dynamic outreach initiative developed by Disney Theatrical Productions to create sustainable theater programs in under-resourced elementary schools. The grant funds two years of programming; Goodman Theatre, under the leadership of Walter Director of Education and Engagement Willa J. Taylor, will select five area public elementary schools to participate in spring 2018, and another five will be selected for the following year.

“We are proud to build on our longtime relationship with Disney with this wonderful new partnership that expands our Education outreach into elementary schools for the first time,” said Falls. “Willa Taylor has done extraordinary work over the past decade to exponentially increase and deepen the Goodman’s Education and Engagement programming. Disney Musicals in Schools continues that effort, giving Chicago youth a top-tier introduction to theater.”

“Under Robert Falls’ and Roche Schulfer’s leadership, Goodman Theatre continues to be one of the country’s premier theatrical institutions, creating compelling and innovative productions. Bob’s direction brought Aida to Broadway, and later led the vision that brought the first production of The Jungle Book to the stage. I am thrilled that we can continue our partnership by supporting this education program,” noted Thomas Schumacher, President & Producer, Disney Theatrical Productions.

The selected schools will participate in a 17-week musical theater residency, led by a team of teaching artists trained by the Goodman and Disney Theatrical Productions, at no cost. Each school will receive performance rights, education support materials and guidance from the teaching artists. The program features a professional development focus, through which participating school teachers partner with Goodman teaching artists to learn just how to produce, direct, choreograph and music direct, culminating in their first 30-minute Disney KIDS musical at their school. As a capstone to the experience, the Goodman will host a “Student Share Celebration,” in which each school performs one number from their show on the Goodman’s stage for an audience of students, teachers, family and community members.

“Disney Musicals in Schools’ emphasis on creating sustainable in-school programs by training teachers and parents aligns with the Goodman’s 30-year commitment to teacher praxis, and our long-term commitment to partner schools in our School Matinee Series,” said Goodman’s Walter Director of Education and Engagement Willa J. Taylor. “The Goodman is excited to continue our relationship with Disney, and partner in this new way.”

Disney Musicals in Schools was launched in 2010 in response to Disney Theatrical Production’s concern that under-resourced public elementary schools were not afforded equitable access to the arts. After successfully offering the program in New York City schools, Disney Theatrical Productions began partnering with organizations in other communities across the United States.

Disney KIDS musicals, created in partnership with Music Theater International (MTI), are 30-minute musicals designed for elementary school performers and have been adapted from the classic Disney films: 101 Dalmatians, Aladdin, The Aristocats, Cinderella, The Jungle Book, The Lion King and Winnie the Pooh.

For three decades, the Goodman has demonstrated a commitment to three core values—quality, diversity and community. The theater is distinguished by its proactive investment to the productions on stage; making aesthetic and cultural diversity the fabric of the institution; and developing programs that bring Arts as Education to Chicago youth, lifelong learners and audiences.

One shining example of this commitment is the new Alice Rapoport Center for Education and Engagement at Goodman Theatre (opening in the spring of 2016), which has broadened and deepened the Goodman’s service to its community—efforts that evolved when Robert Falls initially became artistic director in 1986, and have exponentially expanded during the past 10 years under Taylor’s leadership.

Today, the Goodman offers more than 20 Education and Engagement programs—100% of which are funded by individual contributions—offered year-round and free of charge. Eighty-five percent of the Goodman’s youth program participants come from underserved communities.

Applications for the Disney Musicals in Schools program will be available in the fall; for more information, visit www.GoodmanTheatre.org or call 312.443.5581.