Written by former The Colbert Report writers Peter Gwinn and Bobby Mort and directed by artistic director of The Second City Training Center Matt Hovde, Twist Your Dickens—blends legitimate theater, parody, sketch comedy and improvisation (including the integration of audience “misdeeds” that are written in the lobby preceding the show). The show finds Scrooge and Tiny Tim hopelessly mixed up with characters from the Peanuts holiday special, the Island of Misfit Toys and even Little Orphan Annie.

While the set and costumes reflect The Second City’s minimalist aesthetic, audiences can expect to see backdrops of their favorite holiday television specials and the ensemble sporting “business casual Dickensian” wear inspired by ugly sweaters and other pop culture icons.

Twist Your Dickens runs December 5 - 28 in the Owen and is appropriate for adults and savvy teens age 16+. Tickets are on sale now and are available at GoodmanTheatre.org/Twist, by phone at 312.442.3800 or at the box office (170 North Dearborn). Readers should note that the show incorporates the use of strobe lights, smoke and haze.

On Tuesday, December 9 at 6 p.m., Goodman’s Scenemakers auxiliary board hosts Cocktails with a Twist, a night of yuletide debauchery with pre-show cocktails and hors d’oeuvres—with a twist, and a few surprises—in the theater’s rehearsal space, followed by a performance of The Second City’s Twist Your Dickens revue. The party will continue post-show with more holiday libations and revelry. Proceeds from the benefit will support Goodman’s new play development initiatives and Education and Community Engagement programming.

The Second City Twisting Your Dickens at Goodman Theatre This Season 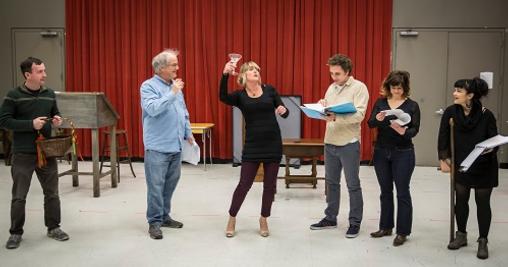