In conjunction with a production of playwright Lorraine Hansberry’s final work, The Sign in Sidney Brustein’s Window, Goodman Theatre will present a Lorraine Hansberry Celebration (April 30 – June 5), curated by Goodman’s resident director, Chuck Smith. Honoring Hansberry’s life and career, the celebration will consist of programs and performances that focus squarely on the author’s Chicago roots, the forces that shaped her groundbreaking work and her legacy. In addition to scholarly discussions and events designed to highlight her life and career, the celebration will culminate in two major events: Lorraine Hansberry Day as proclaimed by the City of Chicago (May 19), commemorating what would have been Hansberry’s 86th birthday and The Lorraine Hansberry Awards (May 24), honoring five African American women, all natives of Chicago and contemporaries of Hansberry, whose work helped transform the American theater.

Born in Chicago, Lorraine Hansberry made history in 1959 as the first African American female playwright to have a work produced on Broadway with A Raisin in the Sun.  The play’s success led Hansberry, at age 29, to become the youngest American playwright, the fifth woman and the only African American to win the New York Drama Critics Circle Award for Best Play of the Year. In addition to earning a Tony Award nomination for the play, Hansberry wrote the screenplay for its 1961 film adaptation, which won a special award at the Cannes Film Festival and earned Hansberry a Writers Guild of America Award.

​At the center of the upcoming celebration is Obie Award winning director Anne Kauffman’s revival of The Sign in Sidney Brustein’s Window, Hansberry’s final work that premiered on Broadway just three months before her death at age 34 in 1965. Set in Greenwich Village 1964—a magnet for ideals and activism of every stripe—the work eerily reflects today’s political climate, holding up a mirror to the injustice and corruption of the contemporary world. As Sidney gets increasingly swept up in the radical issues of the day, however, he ignores the equally dangerous tension mounting between himself and his wife Iris, the one person he holds most dear. The Sign in Sidney Brustein’s Window appears in the Goodman’s 856-seat Albert Theatre starting April 30.

“During her all-too-brief life and career, Lorraine Hansberry left an indelible mark on the American theater. It has been an honor and a pleasure to curate the celebration of this great literary giant—and one of my personal heroes," noted Smith, who directed a major revival of A Raisin in the Sun at the Goodman in 2000. "The rich history of the Hansberry family in Chicago is always worthy of discussion. Since performances of The Sign in Sidney Brustein’s Window are scheduled throughout May, the month of Lorraine’s birth, a celebration seemed in order. Highlights include exploring Lorraine’s lesser-known works like Les Blancs and To Be Young, Gifted and Black. I’m looking forward to sharing a fascinating journey through the life and works of this legendary artist."

​Other events celebrating Hansberry’s indelible impact and legacy include discussions of Hansberry’s life and works by  area scholars, including Northwestern University professor and Hansberry scholar Harvey Young, Northwestern University professor Ivy Wilson and Chuck Smith; a bus tour of the Chicago South Side neighborhoods where Hansberry grew up; Mayor Rahm Emanuel’s proclamation of May 19th as “Lorraine Hansberry Day” in Chicago; and the inaugural Lorraine Hansberry award ceremony at the Chicago Cultural Center.

For more information about the upcoming celebration and for tickets, visit: GoodmanTheatre.org/Hansberry.

​Tickets to the Goodman Theatre production of Hansberry’s The Sign in Sidney Brustein’s Window ($25-$75, as well as special $10 student tickets) are on sale now; visit GoodmanTheatre.org, call 312.443.3800 or purchase in person at the Box Office at 170 N. Dearborn.
​ 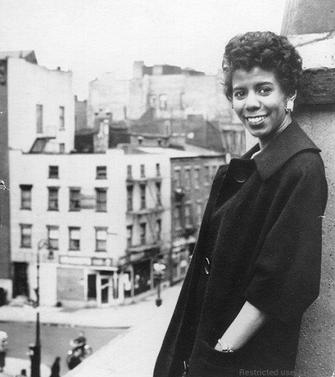 Acclaimed playwright Lorraine Hansberry on the roof of 337 Bleeker Street, NYC her west Village apartment where she lived with her husband Robert Nemiroff (photo by Nat Fein).