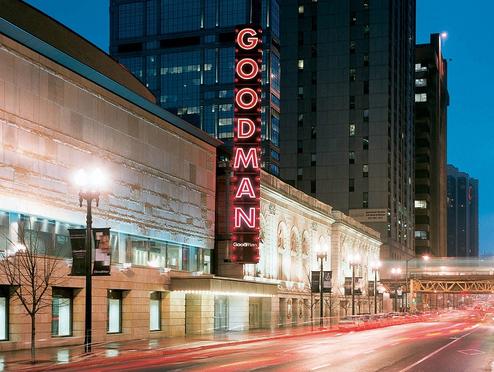 In support of several of Chicago’s off-Loop theater companies, Teatro Vista, Definition Theatre Company and Collaboraction, Goodman Theatre will be a producing partner on several high-profile productions this summer—two of which open this week. The output of the collaborative effort is a bit staggering. The Chicago premiere of Branden Jacobs-Jenkins’ An Octoroon, which opened recently at Victory Gardens, is directed by Goodman resident director Chuck Smith. Teatro Vista’s La Havana Madrid by Sandra Delgado recently opened at the Goodman in the Owen Theatre, following two sold-out previous engagements (at Steppenwolf Theatre Company and The Miracle Center in Logan Square). Directed by Cheryl Lynn Bruce, La Havana Madrid was developed in 2015 during Delgado’s time as a member of the Goodman’s Playwrights Unit—a year-long program for Chicago-based writers, and a significant component of the Goodman’s new play development efforts. Collaboraction’s PEACEBOOK —24 social-issue driven short performance pieces rendered by more than 200 artists in a city-wide festival of theater, dance, music, visual art and spoken word—launches at the Goodman on August 26 in the Owen Theatre, followed by tours to south, west and north side neighborhoods in Chicago Park District’s Nights Out in the Parks program.

“Among the many ways that theater in Chicago is unique, one of the best is the collaboration among its companies— each of which contributes to our nationally-recognized cultural landscape,” said Goodman executive director Roche Schulfer, who is also a founding member of the League of Chicago Theaters. “As an artistic and community organization equally dedicated to furthering the art on stage and providing service to Chicago, the Goodman is proud to contribute to this excellence with resources to help these projects flourish.”

Over the past two decades, the Goodman has served as a production partner (providing financial support and/or physical space) for dozens of projects, including an unprecedented three-year residency with Teatro Vista that resulted in producing the new works El Nogalar by Tanya Saracho, Cándido Tirado’s Fish Men and Quiara Alegría Hudes’ The Happiest Song Plays Last. Other previous partner organizations include Aguijon Theatre Company, Albany Park Theater Project, Black Ensemble Theater, Collaboraction, Congo Square, Court Theatre,  and Lookingglass Theatre Company, among a host of other companies.