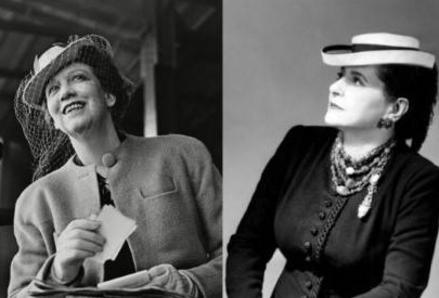 Goodman Theatre has announced it will produce the world premiere of War Paint, a new musical that charts the ascent and arch-rivalry of cosmetics entrepreneurs Helena Rubinstein and Elizabeth Arden. The production will star Patti LuPone, who the New York Times has said “generates more raw excitement than any other performer on Broadway” and Christine Ebersole, a “first-class, revitalizing master of period style” (The New York Times). Focusing on the tense dynamic between Rubinstein, played by LuPone, and Arden, played by Ebersole, the play looks into the lives of the brilliant innovators with humble roots who shrewdly navigated the 1930s male-dominated business world to change the business of beauty. Directed by Michael Greif (Rent, Next to Normal, If/Then, Grey Gardens), War Paint will reunite Scott Frankel and Michael Korie—the acclaimed composer and lyricist team of Grey Gardens and Far From Heaven—with Tony Award and Pulitzer Prize-winning playwright Doug Wright (Grey Gardens, I Am My Own Wife, The Little Mermaid). The musical is inspired by the book, War Paint, by Lindy Woodhead and the documentary film, The Powder & the Glory, by Ann Carol Grossman and Arnie Reisman.

“We are proud to produce the world premiere of War Paint, a bold and exciting new musical about two fearless women who broke new ground in luxury beauty, starring the incomparable musical theater titans Patti LuPone and Christine Ebersole,” said artistic director Robert Falls. “It’s particularly thrilling to collaborate with this enormously talented creative team. I consider Grey Gardens to be one of the most beautiful musicals to emerge in the past years, and I’m delighted to welcome these artists to the Goodman and Chicago.”

Helena Rubinstein and Elizabeth Arden defined beauty standards for the first half of the 20th Century. Brilliant innovators with humble roots, both were masters of self-invention who sacrificed everything to become the country’s first major female entrepreneurs. They were also fierce competitors, whose 50-year tug-of-war would give birth to an industry. From Fifth Avenue society to the halls of Congress, their rivalry was ruthless, relentless and legendary.

Patti LuPone (Helena Rubinstein) most recently starred in Douglas Carter Beane’s Shows for Days, directed by Jerry Zaks, at Lincoln Center Theater. Her New York stage credits include Anna 1 in The Seven Deadly Sins (guest soloist with the NY City Ballet); Joanne in Company (NY Philharmonic); David Mamet’s The Anarchist and a host more award winning and acclaimed productions. She was on hand in Chicago when she performed as part of the Auditorium Theatre’s massive 125th celebration.

LuPone is a founding member of the Drama Division of The Juilliard School and of John Houseman’s The Acting Company. She is also the author of the New York Times best-seller, Patti LuPone: A Memoir.

Winnetka native Christine Ebersole (Elizabeth Arden) received virtually every off-Broadway award and her second Tony Award for Leading Actress in a Musical for her dual performance as Edith Beale and Little Edie Beale in Grey Gardens. Other Broadway credits include her Tony Award-winning performance as Dorothy Brock in the smash hit revival 42nd Street, Dinner at Eight (Tony and Outer Critics Circle Award nominations), Steel Magnolias and On the Twentieth Century among a long list of other notable credits. Ebersole has appeared in over 20 feature films including The Wolf Of Wall Street, Amadeus and Tootsie and her television credits include roles on Ugly Betty, Law and Order, Unbreakable Kimmy Schmidt and the First Lady on the CBS hit show Madame Secretary.

War Paint will run in the Goodman Theatre’s 856-seat Albert Theatre beginning June 28, 2016. Tickets are available now by subscription and to groups only. To subscribe or to learn more, call 312.443.3800 or visit GoodmanTheatre.org/Subscribe.