As the wind picks up, the leaves change and the kids go back to school, Chicago finds itself without the summer comforts of outdoor concerts, picnics at the lake, and iteration after iteration of street festivals. The city begins to turn its attention to Chicago’s thriving museum culture, jam packed with unique and eclectic art exhibits that will sate the taste of any Chicago native (or visitor). Our survey of the most intriguing Chicago’s art exhibitions this season will cover contemporary and traditional art from painters, printmakers, sculptors, photographers, and even pop stars from every corner of the world.

The Museum of Contemporary Art (mcachicago.org) will feature more than 400 objects from the David Bowie Archive for David Bowie Is, an illuminating show that runs from September 23 to January 4, 2015. After months of an generous online marketing campaign, the long-awaited exhibition will give viewers a behind-the-scenes look at Bowie’s creative processes, displaying handwritten lyrics, photography, original costumes and rare performance recordings. Visitors will be enticed with Bowie’s first steps into his music career, the inner workings of his creative collaborations, and insights into his wildly popular performances. The MCA is the only American museum to feature this exhibition representing an inimitable look into the cultural imprint of the life of this incomparable icon, so get tickets now before it moves onto its next stop, Paris!

The Art Institute (artic.edu) will feature several fascinating exhibitions during the awkward summer-to-fall transition, three of which close in early October. The first is Onchi Koshiro: The Abstract Prints, which features a rare collection of Koshiro’s prints constructed with heavy influence from Wassily Kandinski and Edvard Munch. Koshiro’s prints rarely have duplicates, and very few of them are available for private ownership, so this is a rare and special opportunity to view his abstract printmaking. The exhibit closes on October 5.

Closing a week later is What May Come: The Taller de Gráfica Popular and the Mexican Political Print, a unique exhibition showcasing a woodblock print custom made 70 years ago for the Art Institute by Mexican political activist and artist Leopoldo Méndez. The exhibit also features prints, posters, and illustrated publications from the museum’s collection of works from the Taller de Gráfica Popular (TGP). Pay it a visit before October 12.

The third exhibit—and by far the most non-generic—is the Art Institute’s  Magritte: The Mystery of the Ordinary. Earlier this summer, the museum has taken creative marketing to a new level and began peppering the city with some of surrealist legend Magritte’s favorite objects—to the delight of many unsuspecting art lovers. Several storefronts and organizations in downtown Chicago have collaborated to turn the city into a giant, 3D surrealist canvas. On July 25, the two giant feet from Magritte’s painting The Red Model appeared furtively on Oak Street Beach. The citywide collaboration was developed with Leo Burnett Chicago and the Chicago Park District.

While touring the other downtown museums, keep an eye out for the surreal; the Art Institute promises more surprises before the exhibit closes on October 13.

There’s no question that Chicago’s big name museums bring unparalleled, elevated cultural experiences to the city’s residents. But off the beaten path in the Windy City’s smaller, lesser known museums, you will find some of the best art in the Midwest.

The Swedish American Museum (swedishamericanmuseum.org) will feature painted Ariana Ramhage in Bluescapes of Sweden, opening on September 12th. Ramhage’s stunning watercolor landscapes are painted from memory of her beloved home, and evoke a sense of warmth and happiness. Ramhage herself will attend a gallery walk on September 14 at 11a.m. and offer insights on her own work.

From a very different hemisphere, the National Museum of Mexican Art (nationalmuseumofmexicanart.org) is proud to present America’s largest annual Day of the Dead exhibition, which will feature ofrendas, artwork and installations by Mexican artists from both sides of the border. The exhibit will celebrate life by glimpsing death, and offering its visitors a peek into the ancestry and rich cultural history of Mexico and Yucatan.

The Chicago Cultural Center (http://www.cityofchicago.org/city/en/depts/dca/supp_info/chicago_culturalcenter.html/) has an impressive lineup for September. Several new exciting exhibits will open, the first of which is called All The Names: Patricia Rieger. Rieger uses images, sculpture, and paintings to explore paradoxes and opposites, movement and silence, private and public language. Her work creates a unique sense of tension and poetry from the mundane and ordinary. All The Names runs from September 13 to January 4, 2015.

A second exhibit opening at the Cultural Center with identical run dates is Topography of Tension: Frank Connet. Topography will feature the technique of mokume shibori, used to create patterns on a fabric surface. Connet’s 20-year fascination with this curious technique has yielded a series of sewn and tied bundles, each unique and full of tension and potential. His work is informal and intuitive, and he lets the works unfold as naturally as they possibly can.

For those with a taste for the contemporary, visit Intuit: The Center for Intuitive and Outsider Art (art.org). This new museum will present Collective Soul, an exhibit exploring the relationship between art and collector. Viewers will see works from private collections that express self-taught, authentic artistic expression from a diverse caché of Chicago artists. Collective Soul opens with a free opening reception from 5-8 p.m. on September 19.

If Intuit didn’t satisfy your thirst for the contemporary, visit Aspect Ratio (aspectrationprojects.com) for brand new work from gallery artist Bryan Zanisnik. The Passenger will explore Zanisnik’s relationship with suburbia, family catastrophe, and American masculinity. The exhibit will cover several media, including a video, Aquarium Painting, and hand-stitched textiles. This industrial Americana experience opens September 5 with an opening reception.

The Kavi Gupta Gallery (kavigupta.com) in the West Loop will open two new exhibitions on September 19. First is Mickalene Thomas: I was born to do great things. Thomas’s first solo exhibit will heavily focus on her mother, Sandra Bush, and take the form of a domestic installation. She will exhibit bronze works based on her mother’s personal items and in doing so, explore her own memory and nostalgia.

For some more robust galleries with insightful exhibitions on tap this season, visit college campuses and their surrounding areas for their affiliated art centers. The Hyde Park Art Center (hydeparkart.org) has an interesting exhibit on display until November 12, The Chicago Effect: Redefining the Middle. This public program engages artists and practitioners to explore the concept of “the middle-” boundaries, limits, and spaces in between, both conceptual and concrete. The Art Center as a middle occupying space illustrates just how “the middle” can foster intercommunity connectivity and engage audiences from either side. The curators see the “middle” as an essential condition of the creative process, and the exhibit includes a year-long think tank from teams of academics in diverse fields that questions assumptions about how an art center can and should function.

Also on display beginning in September will be works from 25 graduating artists from the Center Program’s 2014 graduates.

Right next door to the Art Center is University of Chicago’s Smart Museum of Art (smartmuseum.uchicago.edu), which will open a large, sculptural exhibit in September. Carved, Cast, and Crumpled: Sculpture All Ways will feature just that: an investigative survey of objects and sculptures. This is the first of many special projects to commemorate Smart’s 40th anniversary, and will showcase a foundational component of the museum’s sculpture collection dating back to 1974. The exhibit will explore the essential qualities of three-dimensional art across historical and cultural contexts, questioning what it means to be the in the presence of an object.

Carved, Cast, and Crumpled will open on September 27th. As part of their anniversary celebration, the museum will open up Gallery X on the same day as the exhibit, a year-long experiment to further engage museum visitors. The space will serve as a hub for creative discussions, and redefine the museum’s role as a teaching museum by helping craft their future approaches to visitor engagement.

On the other side of town comfortably rests Northwestern University’s Mary & Leigh Block Museum of Art (blockmuseum.northwestern.edu). Block will feature the first U.S. survey for Kenyan born and Brooklyn based artist Wangechi Mutu in Wangechi Mutu: A Fantastic Journey. The survey will highlight more than 50 of Mutu’s works spanning the mid 1990s to the present. She is best known for her large scale collages of female figures in other-worldly landscapes. The exhibit opens on September 27.

Rest assured that Chicago’s rich artistic culture will never be short of incredible eclectic programming. The beautiful summer weather has served as an excuse to avoid museum visits, but once the snow blanket settles on the city, we will have no choice but to turn our attention indoors and begin a long-awaited journey of captivating artistic enrichment.

Guide to the 2014-2015 Season of Art Exhibitions in Chicagoland 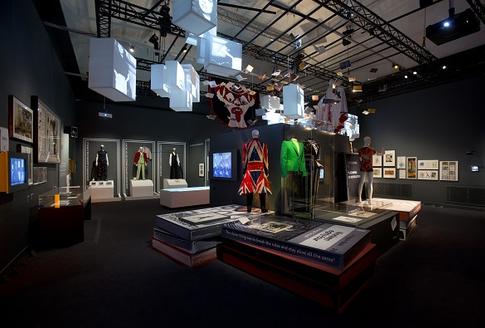