Hubbard Street Dance Chicago and Harris Theater for Music and Dance have announced the addition of a world premiere by choreographer Gustavo Ramírez Sansano to Hubbard Street’s next Chicago engagement. The commission is made possible through the support of the Harris Theater, the See the Dance Consortium, and The Andrew W. Mellon Foundation.

An original work by Ramírez Sansano for Hubbard Street’s acclaimed ensemble of dancers, I am Mister B will be set to the final movement of Pyotr Ilyich Tchaikovsky’s third Suite for Orchestra in G major (op. 55, 1884), as well as the score for George Balanchine’s landmark Theme and Variations, first performed in 1947 by American Ballet Theatre.

Award-winning designer Luis Crespo will create stage décor for the work, with lighting by Jared B. Moore, both of whom contributed to Ramírez Sansano’s 2012 choreographic interpretation of Bizet’s opera, CARMEN.maquia. Branimira Ivanova will return to Hubbard Street for a second costume design credit this season, following the company’s blockbuster Fall Series collaboration with The Second City, The Art of Falling. Ramírez Sansano’s world premiere completes the third of four mainstage programs in Hubbard Street’s 2014–15 season, joining previously announced Spring Series works: Cloudless by Hubbard Street Resident Choreographer Alejandro Cerrudo; Falling Angels and Sarabande by master dancemaker Jiří Kylián; and the company premiere of A Picture of You Falling by Crystal Pite, founder and artistic director of Kidd Pivot.

Says Sansano: “It’s very special for me to return to Chicago, a city that’s shown so much love and support for my work, and to Hubbard Street, where I danced early in my career as a performer. This occasion has inspired me to create a little celebration of dance, in tribute to George Balanchine, whose Theme and Variations was a favorite work of mine to perform when I was a ballet dancer. With I am Mister B, I hope to keep the energy and feeling of that classic piece alive.”

Says Michael Tiknis, President and Managing Director of the Harris Theater: “The commissioning of Gustavo Ramírez Sansano for Hubbard Street is just the beginning of an exciting new step for us and we are proud this gifted choreographer has accepted. The commissioning of new works will increasingly become an important part of the future direction of the Harris Theater for Music and Dance and is made possible by our Imagine campaign.” 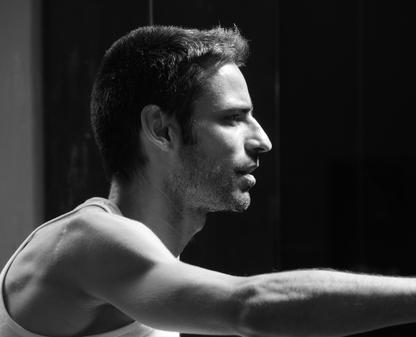