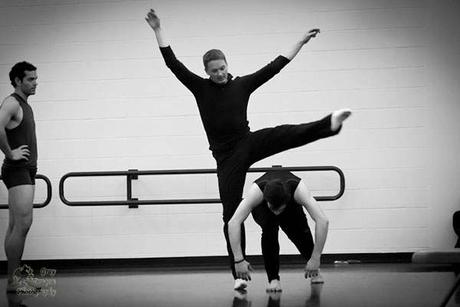 With a theater director’s sensibilities and a unique skill in creating fascinating movement narratives, Clawson has created a deliciously intriguing new work with a nod to film noir. “When Brock created ‘Give and Take’ for us in 2009 the Chicago Sun-Times hailed it as ‘a work of impressive polish, complexity and emotional sophistication,’” says GDC Artistic Director Nan Giordano. “Ever since, we’ve been looking for the opportunity to secure Brock’s talent for the creation of another out-of-the-ordinary work for our exceptional dancers. I know audiences will thoroughly enjoy ‘going along for the ride’ when this work debuts at the Harris.”

Clawson’s expansive choreographic career includes commissioned works for the Joffrey Ballet, Milwaukee Ballet, Dance Kaleidoscope, and The Houston Metropolitan Dance Company, to name a few. Awards include the Dance Chicago 2005 Outstanding Choreography Award and the Cliff Dwellers Arts Organization's 2006 Choreographer of the Year Award; Clawson also received a Jeff Award nomination for his choreography for The Paramount Theater’s 2015 production of The Who's TOMMY.

Gus Giordano’s Sing, Sing, Sing (1983), a classic work choreographed in the Giordano Technique style and re-staged for the entire company of ten dancers.

Now in its 53rd year, GDC is one of the longest running professional dance companies in Chicago. Each year, the company’s innovative outreach program, Jazz Dance/Science & Health, reaches more than 400 CPS students in three neighborhood .

For more information or tickets to the upcoming performance, call 312.334.7777 or visit harristheaterchicago.org.