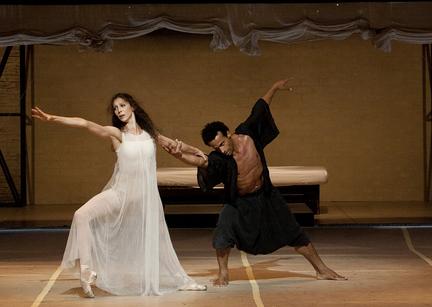 The acclaimed Hamburg Ballet will return to Chicago's Harris Theater with Othello as part of the Shakespeare 400 celebration of the 400th anniversary of the Bard's death (photo courtesy of Harris Theater for Music and Dance).

Hamburg Ballet made its Chicago debut of Neumeier’s critically acclaimed Nijinsky at the Harris in 2013, and was slated to perform the Neumeier classic, Third Symphony of Gustav Mahler, the following year in 2014, when an electrical fire at the Theater forced the performance to be rescheduled. The company will now make its much anticipated return bringing two of their most acclaimed works to Chicago in their only United States performance of their season.

This performance of Othello will take place in conjunction with Shakespeare 400 Chicago, celebrating the life’s work and legacy of The Bard during 2016, marking the 400th anniversary of his death. The classic work will bring to life the tragic Shakespeare tale of passion, jealousy and intrigue.

With the Third Symphony of Gustav Mahler, described by dance critic Clive Barnes as “a work of genius” (New York Post)—the Milwaukee-born choreographer took inspiration from Mahler’s captivating Third Symphony (the longest of Mahler’s nine symphonies), translating the imagery into a momentous six-movement ballet that conjures themes of creation, death, and existence, among others. Since its premiere in June 1975, Third Symphony of Gustav Mahler has become one of John Neumeier’s most important and defining works.

“I have translated the feelings experienced and images suggested while hearing his Third Symphony into movement, into pure dance situations, and into human relationships,” says Neumeier who also designed the costumes and lighting concept for the ballet.

Neumeier holds the Dance Magazine Award (1983), Order of Merit of the Federal Republic of Germany and French Order of Arts and Letters and the Legion of Honour. In 2006, he was awarded the prestigious Nijinsky Award for Lifetime Achievement. He received the Herbert von Karajan Musikpreis in 2007 and the Deutscher Jubiläums Tanzpreis in 2008, all along with countless other awards and recognitions throughout his career.

For more information about the upcoming performance or for tickets, visit harristheaterchicago.org call the Harris Theater Box Office at 312.334.7777.